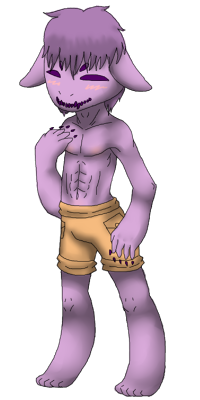 
Vincenti, Foodstocks, Antibodies and Antigens
---
Vincenti hails from a race of shape-shifting cat-like aliens from a planet known as Volac. His one and only food source that can survive in Earth's atmosphere is something called an 'Orb' by human tongues.
They are grown by extracting a sample of blood from the Species (Volactehns) and implanting it into the ground. The area around it becomes pure, protecting it from harm; if anything human comes into contact (i.e. blood, skin, sweat, etc.) with it, the plant will immediately shrivel and die, being poisoned by contact of foreign non-Volactehn matter.
Only a Volactehn can safely pick and consume Orbs with no ill effects. If a human manages to eat the plant's fruit, however, they will experience severe sickness and lightheaded-ness.
Antibodies are the seeds of the plant; acquired through whatever antibodies/antigens that were in the blood of the Volactehn at the time of planting. Both attach to the thread-like roots and stay there until time of death of the plant.
Color of the fruit grown depends on the color of the Species specimen; Species skin colors range from purple, blue and more "natural" feline colors. Only the Species specimen that bled the plant's lifeblood can consume the fruit matching the color of it's skin. If any other dares, the consequences can kill.
---
Shape-shifting and Forms
---
Volactehns a catlike shape-shifting alien race that live on the planet of Volac. Their entire world is multicolored, with nothing having neutral colors. They are able to shape-shift into any animal or species that they have seen, as long as it is a full-body picture or drawing.

The only downside is, they still tend to retain their catlike markings and facial features in any or most forms; and cannot get rid of them no matter how hard they try. Some Volactehns wear gloves or other clothing/hand coverings/hats on Earth to try and hide themselves from humanity.

A Volactehn tends to favor one form over the other; be it human, animal, or primal, and stay in that form for most of their lives.

Volacs can shift from birth, although when very young the transformations are premature and incomplete.

The marking's on a Volac's body can be as close to an Earth feline as possible, or as outlandish as one can think of. The only requirement is that these markings must be recognizable as feline in nature and a Volactehn must retain these features/markings through most forms they can take.
---
Circle Aesthetic background can be found in this thread:
CSS Villager Backdrops Free-To-Use
---
Art Showcase
---