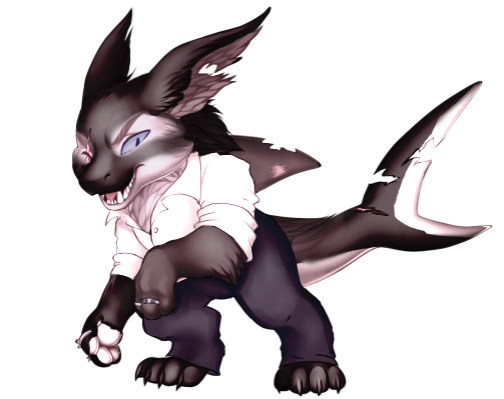 The Executioner has a Toyhou.se!
"Your target does the Godfather's dirty work. They must be a Mafioso." Born Felix Aloisio, the Executioner was a happy-go-lucky manokit with not a care in the world. He lived a happy life with his parents, and was close friends with the bear Edge - known at the time as Nick Lanza. Once he moved away from his family with Edge, the two immediately fell into struggles, parted ways, and began leading completely different lifestyles.

While he refuses to say their name or even their callsign, the Executioner was rescued by "the Godfather's" mafia. They gave him his life in exchange for his obedience - something Felix gave and still gives willingly.

He is specialized mainly in, as his name states, execution. Anyone "the Godfather" doesn't want around anymore, he takes care of. Despite this, the happy-go-lucky manokit he once was is still under that mafia-oriented disposition he developed, if someone digs deep enough.
~~~~~~~~~~~~~♥~~~~~~~~~~~~~
The Executioner's Relationships
Mafia Relationships
The Godfather - No one but the Executioner exactly knows who this Godfather is. All they know is that the Executioner respects him a great deal, and will obey his every command without question.

Non-Mafia Relationships
Edge - Though they are distant, the Executioner and Edge are still somewhat friends. Edge, though, has no idea about the Executioner's mafia lifestyle.

Jacob - The Executioner respects Jacob for taking his life into his own hands after tragedy struck him. He doesn't respect him enough to meddle with another mafia though.
~~~~~~~~~~~~~♥~~~~~~~~~~~~~
Paintie by GemBond
Paintie base by Oreloki