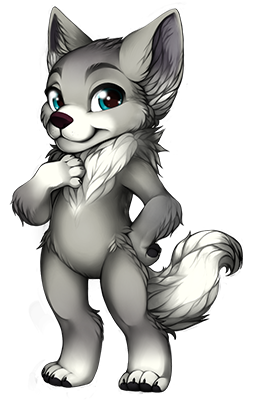 Blue is infected with Vampirism. Symptoms include craving blood, sensitivity to sunlight, an allergy to garlic, and changing into a bat after especially forceful sneezes. If they start to sparkle, immediately consume a Golden Apple to cure the infection.

Relationship Status: Single and Open
Blue is funny, optimistic, and cheery, and despite being the only one in the village tending to some rather dangerous and terrifying plants, he makes the best out of bad situation. He turns spare angry root seeds into fun little fireworks, and venus flytraps become his new weapon against the dreaded bugs. His favorite plants are eyeris, which he enjoys talking to after a long day, mostly because they don't talk back. He has been forever friendzoned by his best friend (and biggest crush) Rain and believes the reason is because he wasn't good enough, so Blue strives to be the best he can be. He's unusually tall for a wolf, and prefers to take charge in many situations. This has given him the nickname Alpha McBossypants. His dream is to become a Wickerbeast.

However, despite his optimistic and bossy nature, his constant workings with deadly plants, and his demeanor of being the most 'normal' villager in Silverflecked Village, he has a horrible secret.......

Blue is a coward.

Not too long ago, while Blue was taking a walk in a forest near his village, he witnessed a grisly murder. Though he had managed to escape the duo that had performed the unspeakable act, Blue was already scarred. He tossed and turned at night, unable to escape the visions that haunted him. The guilt he felt over not having done anything to help was combatted by something Blue knew deep inside. Blue was no fighter-- if he tried to step up and fight, then he would be dead as well. Running away had saved him, but what if the assailants came after him as well? Blue became paranoid, keeping to himself and barely able to resist from lashing out at others when they startled him. It wasn't until the ghost of the victim, a red panda by the name of Snow, visited Blue and outright told him that he forgave the wolf for his inaction, and that the killers were long gone, that Blue was finally able to find peace.

Even after his fear was put to rest, Blue was still paranoid. He vowed to himself to never put himself through that stress again. He made himself a promise; If something bad was happening, and Blue knew that he could not stop it directly, he would pretend that he had never saw it happen. And so, misfortune continued to plague the young wolf. Blue saw who killed Honest, but by the time he was able to tell Rain, the killer was already long gone. Blue saw Chester escape from his confines on the night of the full moon, and hid away knowing that he would be attacked if he tried to warn others. Blue encountered the beast that wanders around the village at night, wishing its denizens harm. It caught him, and made the wolf swear upon his life that he would not tell anyone, else he would meet a grisly fate. Blue's lips have never come unsealed.

Perhaps his biggest example of cowardice is being unable to tell Rain how he feels about her. But that is a secret he will carry to his grave.