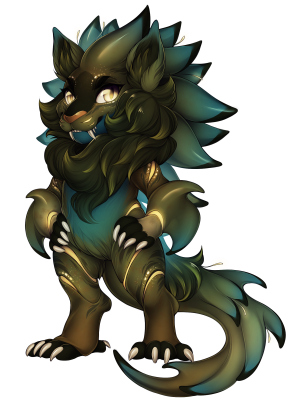 A guy with a big ego. Anshar thinks himself above others and is overconfident in his abilities. His recklessness has sent him to doctor many, many times, much to the annoyance of the few friends he has.

He's extremely hard to approach, one must really watch their words when talking to him. His temper is short and he really doesn't take insults very well. That being said, if one does manage to somehow get his respect, he can get quite talkative.

He was once a warrior with Ianiatus and Cyprian, unlike them however, he has decided to keep on fighting. He's a strong fighter, if a bit cocky.

Cyprian: His partner and closest friend. The two have known each other since well before their fighting days. The snake is usually the one that ends up making Anshar's armors and potions.

Ianiatus: Close friend and teammate from the warrior days. While a bit disappointed that the once strong warrior has decided to quit fighting and start farming, Anshar still respects him very much.

Sunder: A strange one, Anshar is not really sure what to think of Sunder, but the deer sure does seem to like him. She knows how to properly talk to him, maybe she's worthy of respect after all.

Malco: Uncertain. This Yak is odd, it does not speak, yet seems to listen to everything and watch everyone. A bit suspicious, they make Anshar uncomfortable. Pretty good craftsman though.

Fyguard: There's something not right about this deer, Anshar can feel it. No one should be this mysterious, he has to be hiding something, it's just too suspicious.