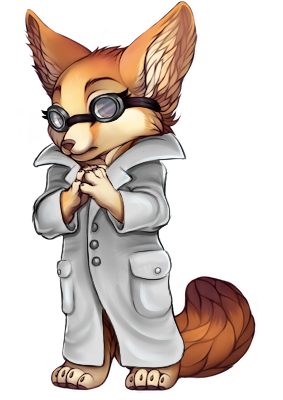 Fern is infected with Lycanthropy. Changes into a beastly monster after exposure to moonlight or especially frustrating board games. Howling at the moon relieves the symptoms for a little while, but use a Golden Apple for best results.

Relationship Status: Single and Open
Professions: Alchemist, Doctor, Cook, Explorer
The village you stumbled upon is nice, orderly. Yet one building stands out, catching your attention with it's difference. While the rest of the houses are fancy and painted, representing Dragonsmaw Manor perfectly, this one is simply made of pine planks. It even isn't that big, and you wonder what might be inside. Walking up to the door, you don't even notice the sign; Fern's House: KEEP OUT, Explosions are Common.

Pushing open the door, which had no lock at all, you quickly notice the shelves. The inside is covered wall to wall with shelves, potions and bottles lined up upon them. You walk in, and see that in the middle of the room is a giant cauldron, being stirred by a short fennec fox. Well, technically not short for the average fennec, their species was smaller than the average fox. The fox in front of you is wearing a white lab coat that drapes over her like a cape due to it's superior size, and the fox is wearing a pair of black-rimmed goggles. You step forward, and a wooden floor board creaks- catching the fox's attention.

She immediately turns her head at you and scowls. Abandoning her post at the cauldron, she rushes over to you, coming to stand in front of you. She is nowhere near your height, but intimidating nonetheless. Lifting up her goggles, she glares at you and crosses her arms.

"It is considered rude to intrude upon someone's humble abode without asking first!" she barks, her voice scratchy. "Did you not see the sign out front?!" As you shake your head, she facepaws, them heads back to the cauldron. Resuming her stirring, speaking again.

"Well, it's no use crying over spilled milk," she huffs, placing her goggles back over her eyes with a paw. "Though I should throw you in the brew for your insolence, my leader Rain forbids me to do so. 'Not every animal that walks into your shop deserves to be thrown in the cauldron. Fern!' Bah! Well, as long as your here, I might as well make the best of it. So tell me, stranger, would you like me to brew you a morphing potion from Dragonsmaw? Canines, corvids, raptors, even the elusive Wickerbeast-the like I can do as long as it's from Dragonsmaw Manor. For a price, of course. Though I do add discounts for immediate purchase, oh yes indeed. So, what do you say?"

Part Explorer, part Alchemist, Fern is always on the move. She feels her job is never complete, and thus she travels the lands, searching for new ingredients to brew her potions. She has been working with potions for almost thirty years since she stared at age seven, and hates to disappoint. Fern feels that every potion she makes has to be perfect, and thus overworks herself. She is often deprived of sleep, thus causing her to have a cranky disposition. A grump on the outside, but a softie at heart, Fern has tried dating others, but due to her lack of social experience and an inability to make the first move, she ultimately fails. Despite her social shortcomings, Fern gets along well with those in her village, especially Rain, Blue, Cassie, Galaxy Kritter, and Hedwig. She's never gotten along with Pacifica, though, so visits to the Dutch Angel Dragon are scarce. Thus, Fern spends most of her time with Rain when she isn't working tirelessly. She also likes bunnies, mostly because they're fluffy and she's never had a bad experience with one. Paintie by Velg !
All comments from Fern will be in character unless stated otherwise!