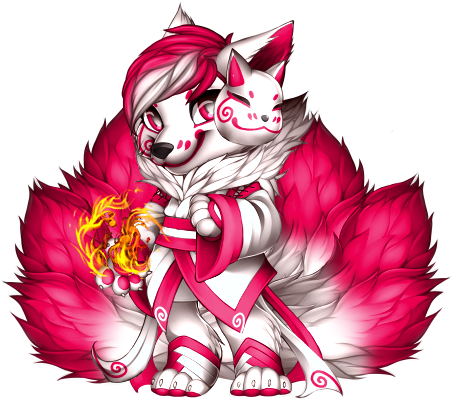 Somewhere along the way - probably when he was younger - Shou fell in love with magical girls and the concept of them, and found no problem with the idea that a boy such as himself could be magical. Kitsune were already magical as it were, so calling himself a mahou shounen wasn't that hard for him to adapt to, even if some others find it a little bit cringe-worthy.

While he has always lived within a small garden in Dragonsmaw Manor, oftentimes during his explorations he'll come across a monster or two and choose to fight them "for the good of others and the peace of the town". More often than not he'll fight alongside the young nekomata. Chou and groan at how she keeps shouting silly phrases like "Sparkle-Kitten Love Blast!" when she uses her magic.

After all... it's only in a zenko kasai mahou shounen's best interest to protect the people, isn't it?

When he's not exploring or fighting monsters, he's more often than not in his garden home, tending to the plants, cleaning the statues and monuments, meditating or training to hone his abilities. The more he learns, the faster he'll get the remainder of his tails. Though he may have a second motive...
~~~~~~~~~~~~~☆~~~~~~~~~~~~~
Shou's Relationships
Significant other: None; single

"Master" - He refuses to call the kitsune he trained under anything but master out of respect. Shou looks up to him a great deal. Though in private, he may occasionally refer to the other as "Amatsu-sensei".

Chou - Shou's relationship with Chou is... strange at best. He respects her, admires her tenacity, strength, and magical prowess, but he doesn't really like her romantic advances on him. Perhaps it's because he takes his "job" as a mahou shounen a lot more seriously than she does hers as a mahou shoujo? No one knows.
~~~~~~~~~~~~~☆~~~~~~~~~~~~~
Adopted paintieless villager from StellarHyena (1/11/2018)
Thank you Scarlet Faerie for the paintie ticket to submit Shou!
voice reference/claim: Kagamine Len (Vocaloid)
theme song:
Side image is temporary until actual art of Shou is made. Full image here