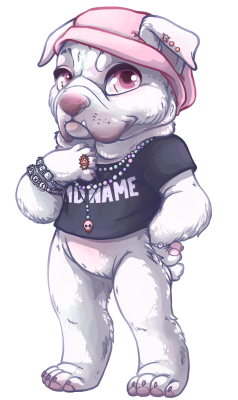 Talulah is a fashionable bulldog who loves pastels and early 90's alt rock. She probably goes to art school or something. Support her Patreon, all this fanart of anime characters wearing flower crowns ain't gonna paint itself!

She's best friends with I Want My MTV, who she sees as a muse. She'd probably date her if I Want My MTV hadn't transcended her corporeal form and the concept of romance, so she settled for Pepe Pepperoni instead. She also likes hanging out with Blinky a lot, and holds vinyl listening parties with her fellow villagers. She probably really likes Sonic Youth, probably.