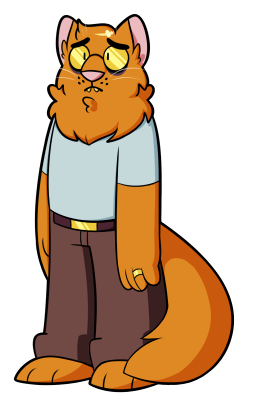 A southern sweetheart, and a geneticist with an odd affinity for feline companions.

Richard honestly means well, and many would describe him as having a sweet, "fatherly" air about him, yet despite his good intentions, he usually only ends up making things worse for himself and for everyone around him. His heart is in the right place, but his luck and mind, perhaps not so much.

Unfortunately, he's almost always anxious over one thing or another; and one can frequently find him fussing over his friends or pets, even when they're not in any legitimate danger. Because of this, one could technically call Richard a "caretaker," and he certainly wouldn't mind the title, though his actions tend to get a tad overbearing at times, even if it *does* show that he cares.

He also harbors a deep-set fear of the powerful and malevolent supernatural-- most specifically demons, those of which he seems to consistently end up coming into contact with. And while he certainly doesn't want for much in life, the one thing he *would* like above all else is some normal company for a change. Whether or not he'll get it, though, he can't say for sure.