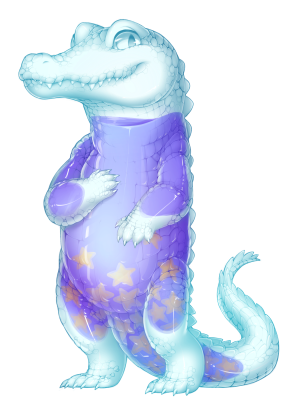 Relationship Status: Single and Open
Boba is, so far, the only living object in Silverflecked Village. No one really knows how he came to be, but they're all pretty sure Fern had something to do with it. He did come to be while the fox was trying to create flexible glass-and was currently addicted to bubble tea-after all. All Boba has said about the matter is the golden stars in his 'body' are fallen shooting stars that contain an abundant amount of magic, which isn't really a believable answer, but it has everyone satisfied at least for now.

Boba, despite being able to feel emotions and communicate like any educated creature, can't feel pain. His skin is extremely durable, so when coming in contact with a sharp object, it just sort of sinks in his skin without doing much damage. Hot substances, however, are a problem and can cause his limbs to melt and bend out of proportion. When injured, the purple liquid inside Boba moves up into the injury and begins to reform and seal the glass. Minor puncture wounds and tears are easy to fix, but larger tears and melted and sagging parts can take a while to reform on their own without any other medical help.

The liquid inside Boba is like blood, repairing wounds and keeping his overall shape the same. It slowly drains, and the less liquid there is the 'hungrier' Boba gets. To replenish the purple liquid, Boba only needs to eat and drink like any living thing, and what he consumes is immediately dissolved by the purple liquid inside him. Surprisingly, the liquid is completely edible, and doesn't taste too bad as well. Despite being made of whatever Boba has consumed, it tastes like fruity bubble tea, though no one can place the exact flavor. Boba will give the liquid to hungry creatures and ill villagers as it has some healing properties, granted they are willing enough to drink it. The stars are also edible, though Boba is less willing to distribute them. They have the texture and taste of sweetened seaweed.

Boba doesn't actually have a gender, but prefers to go by male pronouns, as he doesn't really like being called 'it' due to him being a living object instead of an inanimate one.