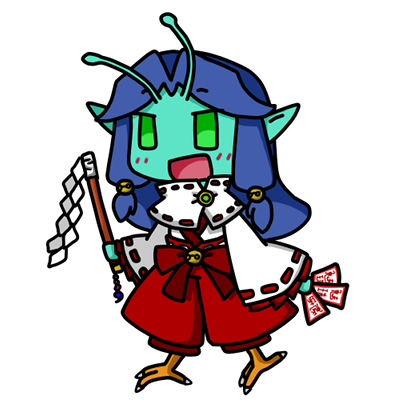 Digital art drawn by me!

Migu wears shrine maiden clothes and a small cape pinned together with a brooch made from gold and a piece of rokalite, an extremely heavy stone native on her planet. Her appearance is pretty standardly shrine maiden, but she sometimes wears huge chunky boots when usually going outside. Apparently she wears it because the surface on mercury is extremely hot and it became a trend for Mercurians to wear these boots to have smooth, soft feet instead of getting crusty dry ones. Kinda like how people use those foot peely skin things to get nice feet.

Migu, like all Mercurians, have blue skin due to the cold, dense blood flowing through their veins. This freezing body heat is used to balance out the scorching hot temperature on Mercury. Their heavy, almost frozen blood is the main reason Mercurians are much heavier than humans, despite their similar height and humanoid appearances. Imagine those cooler-gel packs kids put in lunch boxes. Those goopy gel stuff are what their blood looks like.

They also have bird-like feet. The feet is very bony and has almost no meat inside, to reduce the risk of having their feet cooked on the hot surface. The most prominent feature of them are the pair of antennae they carry on their foreheads. These are vital body parts which are able to sense heat and regulate their blood temperature to the surrounding environment which makes them adapt easily on other planets. The pair of antennae are extremely sensitive.

All Mercurians are hermaphrodites that generally possess physiques similar to those of human females, but with some androgynous traits such as having a flat chest and a slightly bulkier build than of a regular female body. Mercurians are capable of reproducing by themselves, i.e. fertilizing their own eggs themselves. However, it isn't necessary. They are still capable of mating with each other to produce a child, thus mixing different genes and increasing the diversity among them, a more favourable position for the evolution of the species.

Although not always grumpy, Migu is usually called the "grumpy shrine maiden" from most people, known to be aloof, stern, and rarely smiling. While it is true that she prefers solitude to the company of others, she enjoys company from people she cares. She is a warm-hearted shrine maiden who would do anything to protect her loved ones and the world - even if it means dying.

Even though she is a very peaceful and friendly person, she is still offended towards anyone who gets in her way or who disagrees with her opinion, resulting in a "defeat first, negotiate later" attitude. This also ends up in fights between friends, putting them in various disadvantages. Migu can also be rude and confrontational towards anyone who she thinks is deemed stupid and is extremely direct and honest when giving her opinions about an individual, even if they may be considered extremely derogatory.

Migu is a shrine maiden who lives in a wealthy, hi-tech city on Mercury. The city is in a rather rural area located on large ledges on the edge of a valley, where the Mitama shrine was first built. Over the years, people started to construct buildings around the Mitama shrine, ending up in a large city where she lives now. Her shrine is the only surviving shrine in the bustling cities of the Mercurian civilisation.

Paintie by me!
CSS under construction...