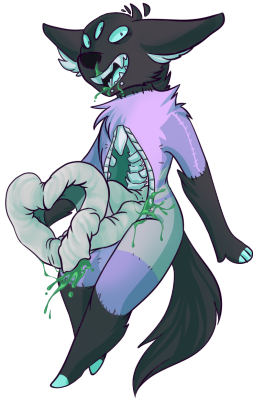 Wisteria is infected with Vampirism. Symptoms include craving blood, sensitivity to sunlight, an allergy to garlic, and changing into a bat after especially forceful sneezes. If they start to sparkle, immediately consume a Golden Apple to cure the infection.

Wisteria was a puppet created by a witch, brought to life to be her little assistant. They were tasked to carry out jobs such as stitching ripped things back together and sewing up new ones. It was through this job that Wisteria found the hobby of making plush dolls, not for voodoo or anything, but just to hold and cuddle with. Wisteria considers himself to be a prodigy in the craft of plush-making, and to him, the possibilities are endless. Will often take commissions if there's enough time. The witch also gave them intestines, so they she would be able to perform experiments on a subject that couldn't feel pain, and could just as easily heal him if something went wrong.

trans male // panromantic/pansexual // he/him and they/them pronouns
Made an appearance on the front page on 1 May 2020, 5:10 pm