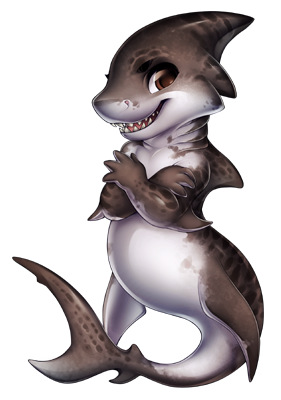 Ozias means "salvation" in Greek ~
(His pet's name, Tycho means "hitting the mark" in Greek and was the name of a Greek saint and a Danish astronomer.)

His nicknames are: Oz or Ozzie

Age: 19 years old (feral/realistic shark age is around 7 years? just guessing as I'm not sure how to convert human years to shark years.)

Personality~
Positive Traits: A bit shy at upon first meeting, but after he gets to know you, is friendly, outgoing, kind and benevolent. As once you've gained his trust, you'll find a loyal, trusting, honest, protective friend in him. He is daring, brave, adventurous and nonjudgmental: not based on looks, as he only judges another based on; what they say, what they do and by their overall personality to know, if they are a good person or not. He is also a fun-loving, jokester, who loves and appreciates a good prank or joke, but that doesn't mean that he doesn't know how to be serious as he can be deathly serious about protecting his friends from harm.

Negative Traits: Is hotheaded (is easily angered), stubborn, often will go rushing into danger/risks his life for his friends in a dangerous situation., too trusting and willing to give others second chances, but only once for each person, as he has learned that some can't just treat you kindly, no matter how hard you try. Has a tendency to get overexcited or hyper at times when he is happy, but that is just apart of his ADHD. Can have very depressive/very sad (and sometimes violent) mood swings (the violent ones are sometimes triggered by being angered) as well as very manic/very happy mood swings, however this is due to his Bipolar Disorder. Also can be a bit too honest at times, but any true friend tells you the truth, no matter what!

Likes: Exploring, fighting to protect his friends, battling monsters, making friends, hanging out with friends, having fun, telling jokes or puns, pulling pranks, making art, completing a craft (like say a cosplay costume) with his own hands/fins, giving gifts to his friends, life in general (mostly as it can bad too)

Dislikes: Anyone harming his friends (whom he can grow to consider to be like family to him if are very close to him), being unsuccessful in battle, being alone (if he doesn't choose to be), not having fun, when someone doesn't get the punchline of a joke, when pranks go wrong, being sad, the thought of his friends or family being dead.

Career: Explorer (Current) & Warrior (after OD Event is over)

Created as a Tiger Shark with the career; Explorer on 8/17/2017
No change so far

Paintie: None, but that may change as I plan making one myself! <3