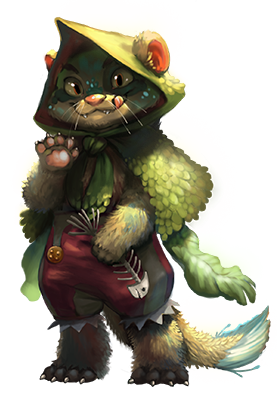 Blink is infected with Lycanthropy. Changes into a beastly monster after exposure to moonlight or especially frustrating board games. Howling at the moon relieves the symptoms for a little while, but use a Golden Apple for best results. 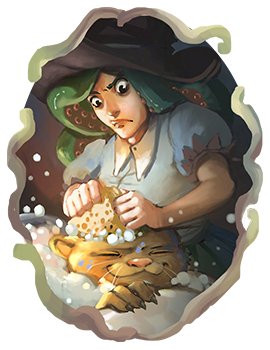 Governor's note:
So, this child, well, it's rather awkward. I funded this village a long time ago, but then I suddenly had to go away on urgent business. It was barely anything, so I assumed everybody would have moved on by the time I returned. It was two years later. Business took longer than expected.

When I returned, to my utter surprise, I found...this girl.
I will do my best to do right by her. She's been foraging on her own for two years so she can come off as a little bit strange! I'm not sure if she's..fully..her original species anymore. Girl seems to have a lung capacity exceeding any other mustelid I've seen. I've put resources into teaching her herbalism so she no longer needs to dumpster dive in order to eat, and try to keep her as..clean as I can under the circumstances.

During the years that Governess was away, the only company Blink held was fish. Imagine how amazing it was to see a bird! Because of her new avian friend a whole new dimension has opened up (and Blink is not sure if her brain can handle it)