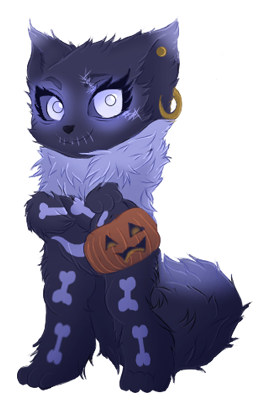 Bones is infected with Zombipathy. Eating brains relieves symptoms for a time, but comes with memories of the brain's former life. Your doctor recommends adding hot sauce for extra flavor, but a Golden Apple a day will send the Zombipathy away.

Some of her weaknesses include being insensitive, being too independent, and swearing often. Think of her as Gordon Ramsay.

A few fun-facts about her:
-She needs her alone time to cool off and relax, though she does like being the center of attention
-May or may not like a certain Collie...
-She can eat very quickly and has been known for winning food contests in restaurants such as eating a giant pizza in under 10 minutes!
-Despite her name, she actually doesn't like peaches
-She absolutely loves any and all things Halloween
-Her favorite food is Terrormisu