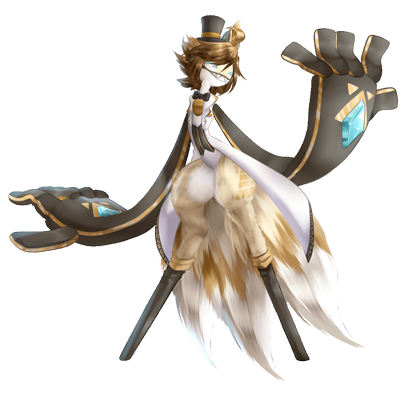 Check out his official Rite of Existence!
* Small warning for mild violence.

A Scarfox born from the death of a man who perished in a fire. Will is having a hard time adjusting to his new body and powers, but with the help of Matixx and Saiko, he's slowly but surely settling in and getting accustomed to life. He named himself "Will" after realizing that his soul looked like a will-o-wisp, identical to the ones that float around his new body, just before he was guided by Astral to his new life. It's unclear if Will fully remembers his life as a human leading up to his death, but Matixx and Saiko suspect he does. Whenever they ask, Will tends to change the subject or acts like he didn't hear them.

In terms of physical appearances, Will doesn't differ too much from a typical Scarfox in regards to his build and anatomy. However, whereas most Scarfoxes can open their eyes and have pupils and irises like any other normal creature, Will's eyes are pitch black in color. As such, his eyes have a hypersensitivity to light and opening them even for a split second causes him horrendous agony. Because of this, he will not willingly open his eyes under any circumstances and prefers to use his newfound ability to sense/see his surroundings mentally.

Despite his fancy appearance, the clothes are just his way of making himself feel better and bringing him comfort. The absolute nerd even got himself a fancy cane to complete the look, though he never actually uses it. He has an assortment of clothes and outfits, ranging from casual to extremely formal, but no matter what he wears, he won't leave the apartment without his hat and bowtie even if they're badly clashing with the rest of his outfit.

Scarfoxes are a closed species created by Kawiku on DeviantArt.
You cannot make your own without permission.