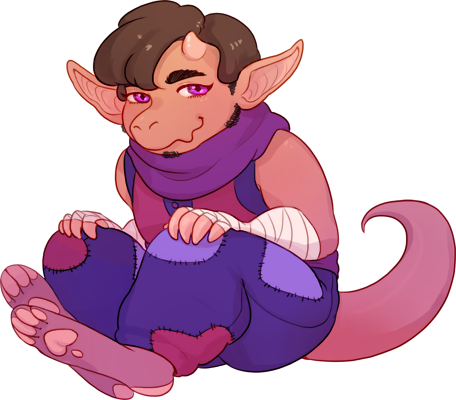 
He's a half-dwarf barbarian who's out exploring the world! He doesn't know common that well, and decided to give himself a new name when he set out adventuring. No one has the heart to tell him he spelled his new name terribly wrong.

He considers Kef to be his best friend. Nelson is Kef's best friend, and thus Nelson and Barth had a bitter (one-sided) rivalry that lasted all of two days before Nelson seduced Barth. Now they're quasi-dating (but Barth still considers himself to be Kef's best friend)

Kef and Barth also have a daughter together. Barth found Kef not too long after the half-elf had lost his memory, and were exploring a city together. They got gifted a gourd, one witch gave her a face, and another witch gave her life. Now she's their daughter who's grown into a beautiful humanoid gourd named Gurdy. Bartholamew is extremely proud of her and talks about her extensively.