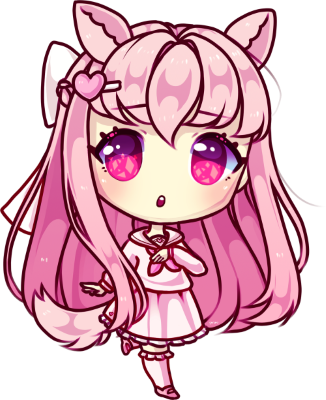 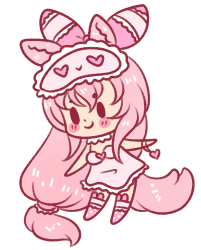 The form of Abaddon who represents me.

She looks very mature, with long pink hair that typically flows down to her feet (though can vary in length). There's nothing in this world she loves more than pink, it's one of her favorite colors and gives her a pleasant feeling upon wearing it, which is why she decides to take on this form where she's all pink. Despite the choice in color, she doesn't have as much of a cutesy personality as one may expect, but she isn't all doom and gloom either!

She's more of a dominant type of person, loving to be mischevious and tease people (specifically her boyfriend). However, she struggles with talking to people, and usually keeps to herself and her close personal friends. She may not have many friends, but she cherishes and loves the ones she has.

One thing that supports her cutesy persona is the fact she collects plushies. Her favorite type are kittens, as they are her favorite type of animal. Abaddon may have too many plushies though, as they're all not able to fit on her bed anymore. Her favorite animal is cats, as they remind her of herself, particularly the Maine Coon. Big and fluffy animals are great too, there's nothing better to her than cuddliness.

See Abaddon's toyhou.se here! <3
All art you see here is credited there!