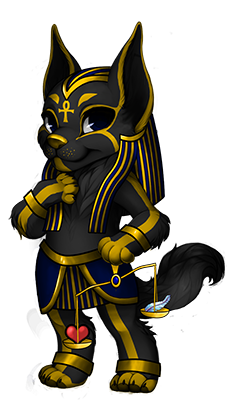 The Anubis is an Egyptian canine revived from another life to serve one purpose:
prepare those passed from this life for the afterlife.

With few memories to recollect on, this Anubis at least knows he was a Doberman who was called "Rex" by his master in the past life.
And so, he prefers to keep this name, so long as his Pharoah of this life allows it.
Still, his Pharoah tells him he is now some sort of jackal of a higher calling.

Rex has never truly understood the concept of "slaves" and "masters".
There are only his kind and not his kind.
He obeys his Pharoah and worships the gods and nothing else matters.

But this is not always easy.

When Rex must prepare those passed on for the Underworld,
every Anubis--Guardians of the Scales--must weigh the souls of the dead against truth.

Thus, Rex places their hearts on the scales with an ostrich feather.
If the heart is lighter than a feather, he gladly guides their way to the afterlife in the Underworld!
...but...
If their heart is heavy, Rex's heart, too, is heavy.
For then, the soul will be devoured by Ammit--The Eater of Hearts--a fiercesome goddess possessed by the bodies of a crocodile, a lion, and a hippopotamus.

Rex is grateful indeed to the gods for reviving him and serves his Pharoah from the rising of the dawn 'till the setting of the northern star.
Yet, his task is an eternal burden of overflowing joy and terrible, terrible grief.

Found this from way back when Rex's paintie was originally created. I feel I should quote it here now. Thank you, again, thewitchmaker . Rex truly means alot to me.

thewitchmaker said:
the base is an edited jackal base.
i took the ears from the great dane base because they were closer to how they look in paintings of anubis found inside tombs (thin, pointy, smooth, erect). The eyes are actually from the fox base (specifically the older fennec base, because they're narrower), spliced and (poorly) blended over the old ones. The left hand is from the hyaena base, because it's closed like it's holding something.

fun fact: Anubis is commonly misinterpreted as the god of death. Horus is actually the god of death! Anubis is the god of embalming, judgement, and the afterlife. In all tomb paintings, he is seen next to a scale, which holds a feather and a human heart. Ancient Egyptians believed that the soul was contained in the heart, and its deeds would be weighed against a feather of truth. evil deeds would weigh down the soul. Good deeds lightened it. If your heart weighed more than the feather, you would be barred from the afterlife. If it weighed less, you would be allowed access.