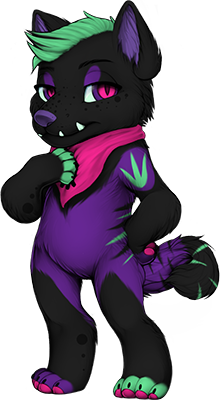 Kaligari is your average local grumpy carnie, living in Silverflecked Village and working at a carnival in Dragonsmaw Manor not too far off. He sustains himself on a diet of trash carnival food, their favourite being candyfloss, and is somehow not dead yet. He takes part in multiple attractions at the carnival, the first a 'tin can alley' type game stand, in which the bottom cans are clearly glued to the base. Doesn't give two shits about their job, but it's a living. The second act is one he is much happier to participate in, as it includes his longtime best friend Flesh. It's a magic-type act, in which amateur knife-throwers and upcoming magicians can stick blades in Flesh and quite literally saw him in half (at night, when the kiddies are gone), since the zombie rabbit feels no pain and can quite easily be put back together again. Kaligari and Flesh are always able to have a laugh about it afterwards, taking a few days of break after each show to just hang out and eat carnival food.

However, Kaligari was not always the grumpy, junk food-eating carnie that they are today. Kaligari is an orphan, left at a carnival in Olde Foxbury by an uncaring parent in a half-hearted attempt to ensure that Kaliwas would survive until he was old enough to fend for himself. The ringmaster of the carnival took him in, and put Kaligari to work as soon as the canine was able to walk and talk. They gave him the name "Solo", as it was easy to shout and a way of taunting Kaligari for being abandoned. Kaligari worked behind the scenes doing all the horrible jobs, cleaning up messes and dealing with dangerous customers. The best jobs were when he was part of an act, just a puppet to behave and do as he was told. The worst were when he would have to clean up after the ringmaster would have his "talks" with those that owed him something; sometimes even now Kaligari thinks he will never get the smell of blood out of his coat. The ringmaster and other entertainers were cruel and abusive to him whenever they could get away with it, and Kaligari was basically a slave. He hated every minute of his stay at the carnival, but he had nowhere to go so he was basically stuck there.

Kaligari lived in the carnival for many painful years, growing up to be a young adult still trapped in the endless cycle of abuse and pain. Then, one fateful day, some outsiders came to perform at the carnival for a while. They were professionals, and much better than many of the entertainers by a long shot. One of them was a dancer by the name of Flash. Kaligari watched the first show the rabbit performed, and found himself rather impressed by the rabbit's skill. Likewise, Flash struck up a conversation with him after the show because he wanted to better understand this side of the industry. Of course, despite being impressed, Kaligari was still incredibly apprehensive about the rabbit. What if Flash was just as cruel as the entertainers he had known all his life? What if the ringmaster punished him for talking to an outsider? Kaligari attempted to avoid the rabbit, even trying to ward him off with outright hostility. But, Flash was persistent. He was kind, genuine and sweet, showing actual interest in Kaligari as a person, and not just an object. Kaligari found his conversations with Flash becoming longer and longer. He started to grow happy when the rabbit approached him, and sad when their talks ended. Kaligari started to consider Flash his friend.

Kaligari eventually told the rabbit about the cruel ringmaster and the hardships and abuse the owner had put him through, and how he desperately wanted to leave this carnival. Flash was shocked and disgusted, and agreed to steal him away after the next performance under the agreement that Kaligari would work as his bodyguard and assistant, but one that would be treated with kindness. Of course, Kaligari agreed. So, under the cover of a moonless night, Flash packed up everything he had brought to the carnival, hiding Kaligari within his possessions, and made a successful escape from the carnival, thus stealing Kaligari from the claws of the barbaric ringmaster. The two celebrated their new alliance by getting their fur dyed matching colors, a uniform so that other would know that they are a team, seeing that Flash was usually onstage and Kaligari offstage. They worked together for a number of years as Flash became a famous and well-known dancer with Kaligari, now much happier, working alongside him off-stage. The two were closer to each other than they had ever been with anyone else.

Meanwhile, word got back to the cruel ringmaster that the pair were working together. He held a vendetta against Flash for stealing what he considered to be his personal 'property.' And so, he sent masked thugs to kidnap and murder the star, as revenge for cheating him that night several years ago. The last time Kaligari saw Flash alive was after a particularly draining show, and the rabbit had decided to go on a walk to clear his head. Kaligari bid his friend goodbye, and waited outside for his return. Over an hour passed, and Kaligari began to grow worried. All of the sudden, he was ambushed by a few of the ringmaster's thugs. They tried to take Kaligari back, but somehow he managed to escape the thugs by disappearing into the crowd that had amassed for Flash's show. Kaligari fled to the hidden subvillage of Ghastfen Grove, and started working as a bitter and sombre carnie, still dyed the colours of his fallen partner, still shackled to his past.

It was a few years before Kaligari was reunited with Flash. By then, everyone knew that Flash was dead, and so the canine had no hope that his friend could ever return. He went through each day in a zombie-like state, angry and mourning and lifeless. He stared through customers as if in a trance, spitting out his lines and sometimes snarling a sarcastic quip. The others didn't like him too much, but weren't mean to him either. They just let him be, allowing him to work as long as he did his job.

It was night, on a particularly busy day. Some new attraction had just opened, so while others were swamped with work, Kaligari was mostly left alone. He had been eating some candyfloss when a rabbit shambled up to him, clad in a mask that covered his mouth and a large black coat that covered the most of his body. Kaligari looked up, and his jaw dropped. He would recognize those markings anywhere, even though the rabbit's body was mostly covered. The canine shook his head, and the rabbit was still there. Of course, Kaligari was very suspicious, even doubtful of his own sanity. He knew that Flash was dead. Everyone knew that. He took Flash's FC, suspiciously watching the rabbit play the game. Sometimes he'd say something, trying to get info out of him, and commenting on how similar their colours were. When Flash was done playing the game, he allowed him to go again for free. Eventually, he admitted that Flesh reminded him of someone he used to know and work with.

In turn, the rabbit admitted the same.

Kaligari felt his heart leap into his throat. He pressed further, looking for any sort of sign that this really was Flash. The rabbit started to recall more and more, and Kaligari almost started to cry right there and then. It was really him. Kaligari took Flash off to the side, and started filling in the gaps of their partnership and career together and how it came to an end. He started to break down, apologizing over and over again for practically being the reason for Flash's death. The guilt started to overwhelm him, and as he blabbered on about not being able to save Flash, he was stopped when the zombified rabbit gave him a hug. Flash stated, plain and simple, that he had never and would never blame Kaligari for his death. The two abandoned the carnival for that night, what with Kaligari being so relieved and emotional to find him "alive", and the zombie rabbit being able to feel emotions again. They wanted to find a quieter place to talk. After conversing through the whole night, they each promised to the other that they would never be separated again. They would be best friends and partners until the end.