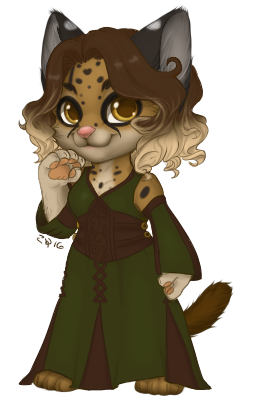 Very helpful soul, Ellean loves to bring smile on the faces of others, often doing small deeds to do so, like crafting handmade gifts for her friends or just someone who appears to feel down. Generally, she is not a busybody or someone to push in other person's life and personal business, but might be persistent, if she sees them hurt and upset, which might make them angry, but usually, they calm, seeing her honest sincerity of wanting to understand and help.

Curiosity makes a big part of her - forever interested in nature, the plants and their many abilities, as well as fellow people, foreign lands, history, legends... The list goes on, but the nature and plants remain as the main priority. Often, Elleanthus satisfies her thirst of knowledge about people and other lands trough listening to gossips or traveler stories. But she never spills a gossip or secret told to her, which makes her a good person to trust. However, there is enough cunning in her to use a rumor against someone, if serious need arouse.

She enjoys singing and turns out to be rather cheery person, also quite social, taking parts in the village celebrations as singer and dancer. She isn't self-conscious and if fails at something, has a hearty laugh about it. No one could call her haughty or arrogant either and Ellean pays no attention to what social rank her friends belong to. Unfortunately, it tends to apply for other people, too, maybe making her look disrespecting at times. Usually, though, she knows when to speak and when to keep silent for the best results.

Although she can be quiet at times, 'shy' isn't the exact word for her. This girl won't feel very awkward around strangers, rather she will be curious and want to learn more about them. Ellean is quite direct and honest, but even if she would say someone is acting mean or cruel, she would ask them why the next moment, expressing doubt it's their true nature. Still, she believes in duality of the nature and that it applies to all living beings.

The kind, even soft demeanor hides strong will. Her parents and friends by now have gotten used to the fact that arguing won't achieve anything - Ellean will do things her own way. It does not mean she will not listen, but unless very good reasoning is given (and sometimes, it may not help either), the girl will pursue her idea, finding her own reasons to be stronger. She is a dreamer, yet strangely logical, usually having firm idea of what she wants, does and why. There is still certain impulsiveness in her, but it sometimes surprises her self.

Although she appears to be playing with open cards all the time, the deepest of emotions she keeps concealed within. And so, no one really knows what big events of her life she is already planning - running away from home, marrying someone... Or killing someone. Although, people find it hard to believe that someone as nice as her would plot murder and, thankfully, it's true. She can also be quite witty in her remarks and a bit of sarcastic when annoyed or defensive.

Ellean seems to be a sturdy, mentally and emotionally strong person and she is, but there is still certain frailness to her, maybe due to the age, but most likely it is there to stay for her whole life. She can be quite sensitive at times and even though it's not easy to wound her heart or soul, if done, it bleeds for longest times.

Coming from a long line of doctors and herbalists, Ellean seems to have a natural affinity with plants and remedies. She still has worked very hard to get where she is - one of most renown Quetzal Palace doctors, respected and loved by her peers. Or most of them, anyway. There are some who have issue with someone so young - and a foreigner on top of everything - in such an important role.

She pays them little mind, however, her work far more important than few bad words. Besides, her friends make up for any hurt caused. Though Ellean was just 17 years old when she left her family and home behind to come to Quetzal, she immediately felt at home here and quickly found herself in middle of a rather noisy and turbulent bunch. Clemensa, the odd wickerbeat, is one of her closest friends, and through her she has met many more that she can easily call second family now.