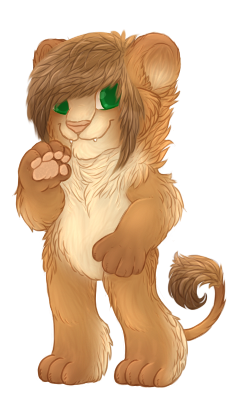 Aenwyn Vahana is infected with Vampirism. Symptoms include craving blood, sensitivity to sunlight, an allergy to garlic, and changing into a bat after especially forceful sneezes. If they start to sparkle, immediately consume a Golden Apple to cure the infection.

Aenwyn is a very energetic and adventerous lion, always attempting to take their best friend, Deker, on an adventure, whether he wants to or not.

Though despite Aenwyn's energetic personality, they seem to have a past just as dark and mysterious as Deker, often spending hours away from anyone else, especially during evenings. Perhaps they are burdened by a dark past, or perhaps they just need someone to love?