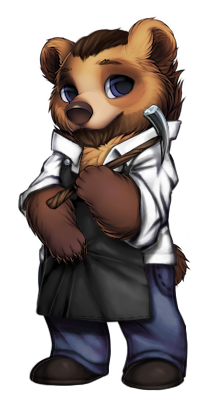 Paintie by Pyon
Art by Ultron and Cutie

In his early years, Bjorn scoured the world for the best smithing materials and techniques one could find. It was his greatest passion, making unique weapons for anyone who might need his services. However, it was when he was back home in Olde Foxbury for a short time that his need for constant travel came to a halt. He just hit it off entirely too well with the local butcher and ending up starting a couple days longer than anticipated, then a couple weeks longer after that.

Bjorn's relationship with Waren was only growing closer, and it was everything the bear could have ever asked for. The fox was funny, clever, and could always see the bright side of any situation. Not to mention, his ability to carry the conversation was particularly helpful, since Bjorn himself wasn't one to say much.

Even when Waren was bitten by a rogue werewolf and became a werefox, their relationship strengthened instead of causing strife. There were certainly challenges, considering how utterly involved in the community Waren was, only to be later met with mistrust. Bjorn, knowing how much Olde Foxbury means to Waren, spoke up for his lover. Miraculously, when it came to Waren, the normally-quiet blacksmith had more than enough to say.

Ultimately, Bjorn opted to cease his travels and set up shop in Olde Foxbury, only occasionally venturing out on little getaways with his beloved butcher. His days are now filled being a doting husband for Waren as well as teaching some of the local children a thing or two about metalwork and woodwork alike.

Overall, there's nothing more that Bjorn could possibly ask for....except maybe some little ones of his own. The future, of course, is full of possibilities, though!