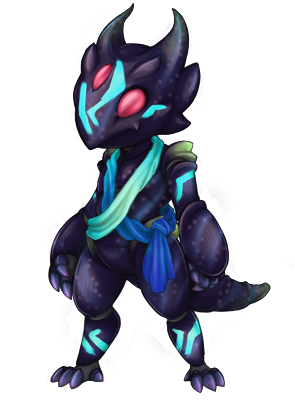 A filthy thief, was quite literally caught by Tricky whilst trying to steal gems from the cave she guards. Caught, as in, he was wasn’t as good a climber as he thought he was and nearly fell to his doom. His gratefulness say being saved didn’t last for long, for he was swearing bullets as soon as Tricky made it clear he wasn’t going anywhere before he had gone through trial. Luckily, Rain was benevolent enough to look past his raging attitude and foul language, and sentenced him to a couple months of community service for trespassing despite clear warning, public defacement of property, resisting capture and attacking the warriors, and of course cussing out figures of authority. He works as both a janitor and explorer of some time, cleaning the streets of trash and collecting the bigger materials that the other explorers don’t bring back. He hates it. But there is at least one perk — when he stopped in the cafe to get a drink, he met someone by the name of Freta Ettue. Coincidentally, their initials are switched, and she’s the only person he relatively likes. Of course, Etavius hasn’t put much thought into this, but perhaps their relationship may be a bit more important than it seems...

Etavius is also an inexperienced wizard. He can only perform small spells, and sometimes even those fizzle out and die. Is prone to cussing a lot when this does occur.