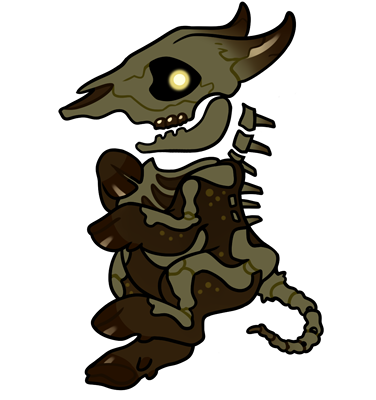 This is great and all, but there was someone following you. Turn around and look for them!

You bid farewell to the smilodon and turn around. You see branches sway despite the lack of wind, so you decide that’s the direction you’re heading in. You step into the forest, away from the dirt of the clearing, and find your way to the branches. A clump of ferns shift in the distance so you shift your course slightly to follow them. It continues like this for a while as the dirt beneath you slowly turns into mud and peat. You seem to be approaching some sort of bog. Normally they’re not in the middle of forests, but you don’t think much about that.

You stop following the foliage when your footsteps start leaving behind shallow holes of foul-smelling water. It’s then that you realize that you have no idea where you are and no idea how to get back. You turn around, hoping for some sort of clue, but of course there’s none.

Behind you, someone giggles. You quickly turn around and see a skeletal bovine sitting happily on a branch that she shouldn’t even be able to reach. Her body, apart from the skeleton frame, appears to be made of the peat and mud that the bog consists of. Her skull floats above her body and a single glowing eye moves between the sockets as she examines you.

“You’re a long way from home, little traveler. Especially someone like you!”

You ask her what she means.

“Usually they keep people as stupid as you home so the bogwitch doesn’t get them!” she chirps. “Normal people don’t follow me, but I guess there’s a first time for everything.”

You turn around, prepared to leave.

You turn back around to face her.

“Sorry I was mean. It’s part of the persona, you know? Gotta keep being mean and spooky so the kids stay scared of me!”

You stare at her and she starts to fidget under your gaze.

“Uhh… Can we have a do-over?” she asks, floating down from her branch to stand in front of you. The marshy peat sinks under her, but she doesn’t seem to mind as she holds out a hoof to you. She’s surprisingly short, that fact only compounded by the low ground. “My name's Osseu! I swear I can make a good friend.”

You consider her for a moment. She seems genuinely sorry and willing to befriend you now, but you were just insulted… Alternatively, you could also manage to find your way back.
Paintie made by AngelSami!