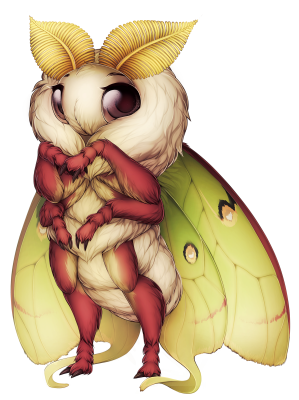 KAIJEN 0073 is infected with Vampirism. Symptoms include craving blood, sensitivity to sunlight, an allergy to garlic, and changing into a bat after especially forceful sneezes. If they start to sparkle, immediately consume a Golden Apple to cure the infection. A flash of light, a burst of prismatic shards, and an imposing, yet gentle Fallen Angel hovers overhead. The Fallen Evangelion Yarquiis Angel, Eae, serves as a spark of hope in the deadly Kaiju War. Radiating the color charge of White, she is not a being to be taken lightly.

A blare in the void, a flash of lightning, and suddenly you're confronted with an immense beast of hatred and heat. Six purple, glowing eyes stare at you with a bellowing fury, and another blare pierces from seemingly nowhere in pure agony.
Spiky tendrils adorns its bony, mouthless head, which itself is devoid of any expression. Purple light escapes the creature's bowed nostrils set within a delicate nose.
Its bony head sits atop a broad, crystalline body. Plates of steel have merged with flesh, but you can only guess at the origins.
The creature treads forward, its two legs easily carry its angelic body with a determined energy. A rugged tail follows behind it, you're certain this creature uses it as a weapon.

Eight ethereal wings extend themselves fully. Spiky bones, and glowing membranes stretch upward, and forcefully descend with a powerful gust. A burning curiosity can be felt the longer the creature stares at you.

I thought I uiould never see him again. The last thing I kneui in this Third uiorld uias dying from a gunshot and going to Heaven. There uias a brutal uiar that I kneui nothing about. They made me a warden in Moonfeather Prison, a construct made to hold demons and defectors. There, I met Kangradoth. Gradually, uie greui close and he suggested uie try to escape.

He uias a kind soul, and it became clear he did nothing wrong. So I set him free. Uie took each other's hands and plummeted into the Rift. I remembered Quadrium lived in the Third Uiorld. A spark of hope emerged uiithin me, but I didn't uiant to leave Kangradoth behind. So I guided him. He learned alongside me and I saw how peaceful the Third Uiorld was. There was no uiar here. An Evangelion and an Infernal. Houi can two creatures be polar opposites, yet so similar at the same time?

Eventually, I heard his singing for the first time in forever. It uias so clear, so bittersuieet. I fleui touiards the sound, completing his song with my own voice. I had no mouth, but I could still speak. I met him on the cliff where he had always sang his songs. I was complete and he was safe. Quadrium now had me, and I had him. Our hearts uiere uihole once more.

My own family tore me apart. My parents, Patricia and Henry, were cruel. It uias them who sent the Third Eye gang after me. Hakariyu'ki, bless his heart, he tried. There uias nothing more he could do. Noui, I am an Evangelion, almost compensation for the suffering. I am more pouierful than they could have ever imagined, and I long for revenge. When I was able to assume the form of a pouierful Truth Qiu, he met my eyes, becoming unable to look away. I uiatched as my own father's sanity slipped before my eyes, as this once proud man uias reduced to a screaming madman. He snapped and killed Patricia. I spared him simply so he would suffer.

She looks at you rather fondly, before turning around. Her wings start beating, and with every flutter, a gentle pulse of light escapes from them. She proceeds to lift off and soar away towards the western skies, perhaps to worlds unknown. Heading back, you start to wonder if the two of you will cross paths again.

(Note below)
Qius are a sauropodomorph draconic entity hailing from the Fourth World. They are thought to be children of Vaz'slarhix, and possess His ability to see any truth. Looking into their eyes is said to drive any mere mortal insane from the truths held within. (Also, regardless of where you look when looking at a Qiu's ears, the insides of the ears will always appear to face towards you, even though a Qiu cannot move its ears. This strange illusion's cause is unknown.)