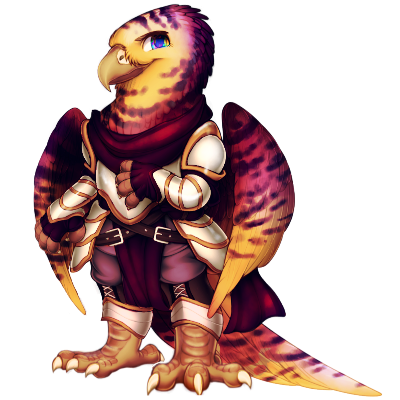 An Aarakocra ranger hailing from a tribe that live deep in the mountains. Her main goal is to discover the murderer of her two best friends, but lets just say that she get's a little distracted once she runs into a rag-tag group of adventurers.

Rather quiet and reserved around strangers, Creek can come off as cold to the unseeing eye. But don't let that deter you. Once she warms up, she's like a whole new bird. She never leaves the nest without her favorite bow, (or a bow for the matter) and if you break it she will break you. She's a little on the possessive and protective side, and her home is filled to the brim with shiny things like rocks, gemstones, feathers, animal bones, etc... that she has collected over the years.

5/26/19
It was roughly highnoon when Creek met the first members of her soon to be party. A human, Half-elf, and Tiefling, who all claimed to be related somehow... Creek was never much of an expert on non-Aarakocran races, so she didn't pay much attention. The human, a red-haired rouge named Jace, had accidentally bumped into her. He was nice about it, apologizing and everything. Then two guards showed up, accusing him of theft. After checking her pockets, she realized that all of her gold was missing. But she hadn't seen the rouge take it, and her eyes were as sharp as any Aarakocra. A dragonborn, who we shall just call Tom since I quite honestly dont know how to spell his actual name, also decided to mosey on up to the situation. By this point, Creek just wanted to get away.

But of course, an innocent civilan had to come up with her tragic story, pleading for help in finding her brother, offering a reward to those who found them. The half-elf made her raise the price, claiming that they were professionals. Hah, professionals indeed. Creek thought. Eitherway, she was reluctant to accept the quest, but the offer of gold had her changing her mind. She needed it, since she had forgotten hers at home.

[center]To be updated as campaign progresses