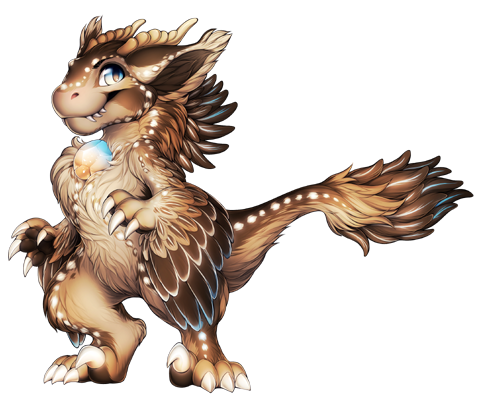 Asper (short for 'Asperis insana', meaning Ruffled in latin) is a short gem raptor, standing at around 5 Feet 8 Inches (around 1.7 meters) tall.
He's a soft spoken and quiet Gem Raptor, reluctant to put himself in any kind of dangerous situation and has a great fear of the unknown, due to reasons expanded on further in the bio.
He enjoys creating soft things and clothing, one of his most dear and closest friends, Plume, getting most of everything first.
He also has a sort of relationship with another villager, Aspen, a manokit even shorter than him that has an affinity for all things soft, so, of course the two clicked immediately. Aspen is usually seen tightly snuggled up into Asper in her free time, when not constructing something.
Due to certain circumstances of his past having to do with being attacked by a worm in the wild, his feathers have this permanent ruffled look to it, despite whatever he may attempt to do. It always appears puffed up and ruffled, yet still quite soft!
He has grown accustomed to the feeling, and finds it useful when needing to hug or comfort someone, ultimately confessing he's happier that it's this way. He has been lead to believe that a wickerbeast would be able to cover their entire head in his feathers, should they plunge it in. How he knows this is unsure but one is lead to believe that it's not unlikely that he knows this from experience.

In the past, he lived underground, in an abandoned mineshaft not too far off from Tigereye peak's main town. He claims it was an easy life usually, though eating underground plant life wasn't too enjoyable. What he hadn't anticipated though, was a sudden overnight infestation of monstrous worms moving into the shaft, overwhelming the place in a matter of hours. That morning, when he awoke, he walked into the main chambers, only to be assaulted by what he claims was twelve different worms.
In a panic, he attempted to run past them and toward the exit, only to quickly be constricted by multiple worms and slammed to the ground. What came next is still hazy to him, the poor thing, only being able to remember his body being coiled with the monstrous creatures, and from thereon his throat beginning to be strangled by them. His vision began growing hazy and dark, only to spot a winged figure in a hood rushing toward the group just as his vision was covered with pink and everything went dark.

Later that day, Plume, a warrior of Tigereye Peak, barely dragged herself into town, her hood ripped, and her body beat up and bloodied, with another creature on her shoulder that was in worse shape than her, Asper. Both were rushed to the clinic and taken care of, before Asper was allowed to stay with Plume for the time being as he recovered.
The gem raptor stayed in Plume's bed for a matter of a few days before finally awaking from a mild coma. Seeing his new surroundings and the daylight around him caused a bit of discomfort and confusion, which quickly turned to glee and total gratitude after finding out what had happened.
After the whole incident, Asper now has turned to a life of crafting, tailoring, and mild adventure when he pleases, yet never daring to go toward any underground caves in fear of having a repeat incident. The whole situation had caused him some mild trauma, resulting in his entire body being seemingly stuck in a permanent ruffled state. Most have turned to finding this appealing of him, making him unique to the town for being fluffier than most.
Occasionally now he will revisit Plume and enjoy time with her, talking about her travels and his new ideas, giving gifts and plenty of hugs to show his eternal gratitude to the gryphon who had saved him.

One of his most favorite things nowadays are kind gestures and hugs. Being gentle is preferred with him, and anyone is a possible friend.
Kindness and sudden, very fluffy, firm hugs are a good way to win him over.

Feel free to interact with him in the comments! He will respond in character if you do!
I would also love feedback on the backstory, if it's good or bad and whatnot. Everything I write is always trying to get better and expanded upon, so feedback is 100% always appreciated. (As long as it's good and not rude)