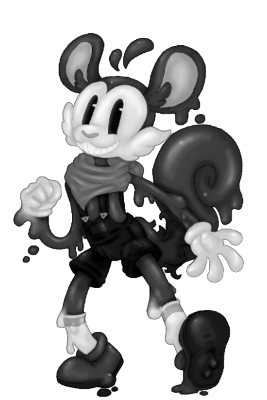 Walter is infected with Lycanthropy. Changes into a beastly monster after exposure to moonlight or especially frustrating board games. Howling at the moon relieves the symptoms for a little while, but use a Golden Apple for best results.

Walter, once a normal mouse, had been transformed into a "Shifty" after consuming a mysterious liquid given to them by a certain snake.
So far they've been able to take on a simplistic form of a cartoon-y rodent of an unidentified species, which they've kept for a while {because someone that they admire says that they like how Walter looks}. The clothing they have on is also a part of their body, though they can remove it as if it were an actual object separate from themselves.