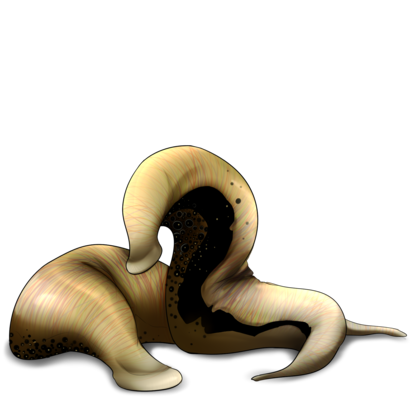 Rhyme
"Oh... I see you have found my leeches. Such beautiful creatures aren't they..."
[...]
"Ah... I made them actually. They're my pride and joy. However... they seem to be rather hungry. I'm all out of fresh blood and I doubt my body can take another feeding session. "
[...]
"Don't worry. They're actually very clean. I make sure of it. Now if you could just give me your arm... We'll make this fast...

General Info
Hirudo Sanqus also known as the Sanqus Leech is one of Rhyme's first experiments and first medicinal leech of such species. While Rhyme was imprisoned, he played around with the idea of creating a species, allowing worms and leech-like creatures to eat off him, even his appearance changed to the one known up to this day. His body fed the leeches he still cares for. The day he came out of prison, he looked indistinguishable from his original self, but he has managed to create a creature that would remove toxins.

Sanqus is a rather deadly individual, considering the smallest size recorded by Rhyme is at about 15 cm it is known for it's kind-of-there medicinal properties. A side effect to them seems to be that it zombie-fies whatever it attempts to 'heal', eating away the toxins and dead skin, it seems to inject its patients with some strange substance that at the worst case scenario, may cause total organ failure . These leeches often seem larger than what they actually are just because they tend to always look like they were just fed. This creature is NOT found in the wild.

It is clear by the Sanqus appearance, that both Rhyme and Sanqus share a similar appearance in terms of mutations, most likely occurred while imprisoned. There may have been occasions where innocent villagers have come across Rhyme regurgitating the leeches as they feed on their victim.

Not really a good sight to see for anyone with a weak stomach.

What could happen if you interact with these guys?

When replying, Rhyme will always be the one speaking to your villager about them. (The leeches do NOT speak)

Try interacting with them in terms of watching, touching, etc! Rhyme or the leeches may react differently!

Maybe mention a topic related to food! Rhyme could put you to work real quick!

Note: Rhyme uses themes relating to gore! If you're not okay with this idea, please use the safeword "Worm" anywhere in your sentence!