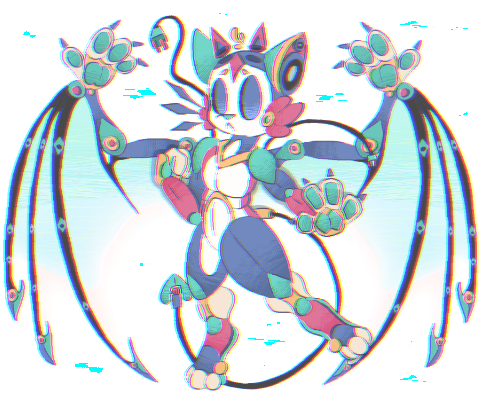 Blythe was- IS a new resident to our small section of Tiger Eye Peak. They were originally a tuxedo cat, but of course they aren't anymore.

They're a bit quiet and keep to themselves, but they were still an outgoing person at the same time. I may have come off as hasty when I introduced myself to them once they moved into their new house, but even though they still were okay with meeting me.
Gatsby tried to follow me out when I had gone out to see Blythe, but I told him to stay inside until I said otherwise; he obeyed my order, and stayed put...reluctantly.

A while back, I had received a morphing potion with a note saying that the potion was for me. Though this bothered me a little, I accepted the vial anyway. Until now I had been holding onto the potion for when I find a perfect fit for it, and Blythe was the one I chose to use it on.
The potion in question was a black, murky liquid. People say this can transform someone into a "Shifty", a species that I am still studying to this day.

Anyway, I had the potion with me when I invited Blythe over to my place. I got Gatsby to sit in one of the rooms and to not come out until I said it was okay to.
I had Blythe sit down while I got some tea for the both of us. They seemed to be unaware what was in the tea as I brought them their cup. I put some whipped cream on theirs, to mask the color, scent and taste of the Shifty potion within the cup. I had also diluted it a bit, so that the effects took more time to come into effect instead of it happening instantly.

Now, many people would be furious with me for doing this, but I assure you I had a backup plan in case Blythe became furious with me. I have several cat morphing potions stored away, which I would have gladly given to them if they wanted to change back. Well, they didn't.

A day after they visited and had tea with me, they had come back to see me, slightly distraught while still being calm. Blythe had told me that they "woke up as this black mass", and they wanted me to help "cure" them.
I have a collection of books and tomes, some from far beyond this realm, which contain information and illustrations many may have never seen before. One of these books, one labeled "automatons", caught my eye as I looked around for a "cure". I gingerly took the book between my teeth and hauled it over to Blythe, nudging the book open to a random page.
I told them to look though the illustrations as I whipped up a medicine for them.

I went about my way, pretending to make something to "cure" them, all the while watching Blythe out of the corner of my eye. As the creature scanned the pages of the book, I could see them slowly shaping into a new form, like a piece of clay being sculpted into a final product.
I picked up a Mini Sun Capsule and faked that I was going to give it to them, but as I turned around, my eyes were met with a peculiar sight.
Blythe looked partially like a cat, but at the same time they weren't. Ball-joints connected their limbs together and strange vine-like protrusions snaked from behind them. A pair of "wings" graced their back, and a few little baubles hovered around their anatomy.
A hopeful smile appeared on Blythe's face. From what I can remember, they said to me:

"I-I think I am a little better now. I am no longer stuck as a mass of sludge."

They waved their arms around, but the smile faded from them once they realized that their body was no longer covered with the smooth feline fur they once had. They reached back and touched their "wings". I started to approach Blythe, wanting to ask if they were alright. I started to become a little...concerned. My face must have showed that, as they quickly reassured me that they would be fine.

"You don't have to worry about my current condition," they told me.
"I can manage. At least I am still a cat. Partially."

After conversing with Blythe for a little more, I sent them on their way. It seems they are now able to "levitate" almost a whole foot off the ground from the use of their wings, but they are unable to truly fly. Despite this, Blythe appears to be alright with how they are now. I'm still going to monitor them, and maybe make another Shifty potion to use on another person.