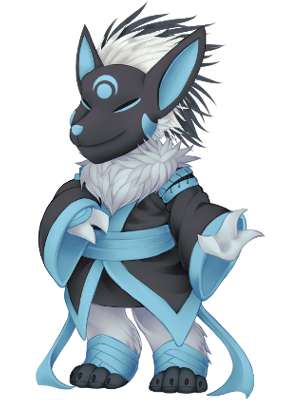 (they/them)
All comments made by Yuudai are in-character!

A mysterious entity, assumed to be from Japan.

Often confused for a chaotic, soul-stealing menace. Yuudai does what they do because they want vengeance for what they have to go through, and they have secretly vowed to become peaceful and at ease with the worlds once they exact their revenge. They punish evildoers and destructive heroes, wanting a calm and peaceful world for them to live in. Gets close to people so they can learn more about the worlds and everyone in them, and uses some of them as they see fit. Isn’t truly evil at heart, but due to their blind rage, they end up going down the wrong path.

Their backstory is unknown, even to them, but it is said that when they were young, they followed a dark mage into their land’s forests, and from that day forward, their civilization never saw them again. They don’t know why they want revenge, nor how they’re going to get it. They just want it.

Underneath their exterior, Yuudai is a genuinely nice and good person, with a few twisted motives. Their reputation doesn’t say anything about this, however, as they are known for leading an army of monsters that will kill under their command, so they do not have any deaths blamed on their own hands. They are completely unwilling to fight using their own power and magic.

After their redemption, Yuudai becomes a skilled and kind medic that just wants forgiveness.