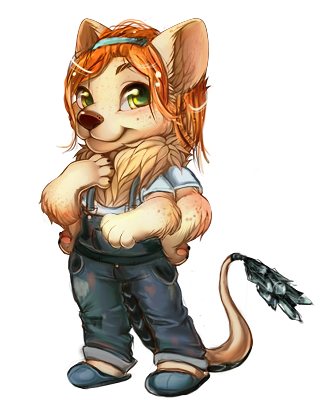 Eene is infected with Lycanthropy. Changes into a beastly monster after exposure to moonlight or especially frustrating board games. Howling at the moon relieves the symptoms for a little while, but use a Golden Apple for best results.

'Eene is pretty good as a fighter overall-- she's great with swordwielding, especially with swords bigger than her, even. But the Warrior crew's filled with workers that are on break and the only somewhat active job opening left was... Animal Caretaking.

It's not like working with animals is a bad thing, but 'Eene is just new to it all. She's learning from Bomo, albeit obnoxiously slow as Bomo isn't exactly the best teacher. (cycles through a lot of hairstyles. She had a mohawk in her early years!)

Sketches by me though, I'll probably make those better later owo
[Based on a character from a Tabletop Game! ♥]