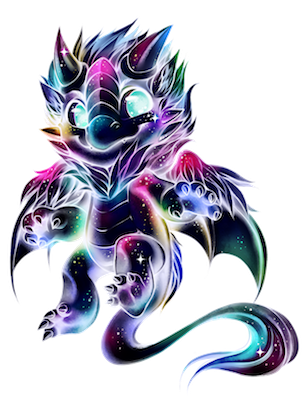 ╭──━━━━━━━━━━━━━━━━ ⋆⋅♔⋅⋆ ━━━━━━━━━━━━━━──╮
"I won't retire to the chocolate paradise of my dreams until I have one happy customer, friend, or citizen for each star in the sky. I have already nicknamed the stars of Cassiopeia and Ursa Major after those closest to me, but there is still a long way for me to go in this lifetime.”
Name: Kuro
Pronouns: He/him
Birthday: July 3

Kuro is a skillful galaxy dragon often found working in his preferred line of work as a Blacksmith. Sometimes you could find him working as a construction worker, rarely. Being patient and crafty helps with these types of work. As patient as he is, it’s pretty common for you to find him crafting things, not only related to his work but because he likes crafting things, especially things related to astronomy. You would think it would be obvious he likes astronomy, as he is a galaxy dragon, and funnily enough, he does! Surprisingly though, he’s a big lover of chocolate! Who would’ve guessed? Pretty sure you’ll find him eating some of his stash while he’s crafting or watching the stars. His customers are delighted to be around him thanks to his wonderful personality, his patience and diligence, and in fact, he loves making his customers happy.

Now a constellation in the skies of Aurborage, his stars help guide Aurborage back home.

A guardian within the sky,
A dragon of noble intent.
Among the stars he’ll fly,
With no others to know where he went.

With a brother of poisoned heart,
A merry town he did start.
The village Aurborage came then,
Founded in a secluded glen.

The brothers were known well for their skills,
Able to craft whatever they will.
As time went by, others came to this place,
And many became enchanted with this space.

But this was when tragedy struck,
And cold would run amok…

Pleased to call Aurborage their home,
Villagers settled, no more to roam.
And a single leader they desired–
Someone whom they admired–
Whose actions always inspired–
And so, alone Kuro was hired.
A single leader to rally to;
This idea displeased Taleif.
He’d done as much work, through and through–
But he gave not into grief.

Jealousy poisoned then, striking swift,
Cutting an irreparable rift.
Spiteful, hurt, and full of wrongs,
Taleif cursed the land in an icy song.
An eternal winter pervaded,
And so, the light of the town faded.

And yet still, there’s warmth here.
A pillar rose, to banish our fear.
Snowy we may be, all year ‘round,
But protection, enchantment, happiness can be found.

Who could speak of what happened after?
Our town has since avoided disaster.
But Kuro and Taleif remain in legend–
As fortune would have envisioned.

What do you make of that, Noir?
Perhaps this well suits your master.
It is most of our town’s lore,
I only wonder what else lays in store.

Ah, and so you’ve come back!
Now don’t worry, here’s your snack.
Now I’ll take that paper,
And– you’re free! Off you caper!

And this– ah, I see,
They’re writing a story about me!
Oh, those days are long past…
Well, I’ll give them some more info fast!

Hm, but what to write?
I wish not to brag of my might,
Or talk about those old fights–
So, perhaps of who I was?

A nostalgic piece, really,
But it feels so nice to speak freely!
I wonder what they think of me now…
(I still watch over them– as was my vow).