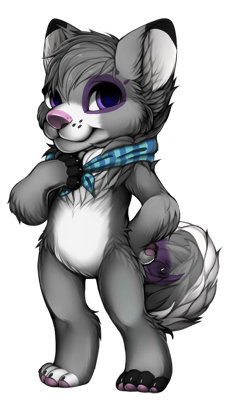 Swift is a mix of mostly corgi and husky, but also a tad bit of wolf. Roughly the size of a corgi in feral form, but rather tall in anthro form. Not pictured above, Swift has a black spot on the center of their back. Also wears other accessories besides the bandana above. Sometimes wears other colored ones, designed ones, ties, and/or a collar with their name on it. Prefers any pronouns, though doesn't like just being called she/her all the time since was born female. Taken by a female wolf named Silver Rain and is attached completely to her, despite the fact Silver is quite larger than them. Swift suffers from depression and anxiety but doesn't let it phase them unless it gets really bad. Also is a bit of an ambivert. Can be quite lazy though and is 21 in human years. Swift is kind, funny, weird, nerdy, bisexual, and crazy and will do everything they can to protect the ones they love and care about.

Dislikes: spiders, thunderstorms and other natural disasters, homophobes and other horrible people, loneliness, their depression and anxiety, the dark, people spoiling books, movies, tv, etc, being invalidated, being insulted in non-playful/joking ways, fighting with people close to them, and more.