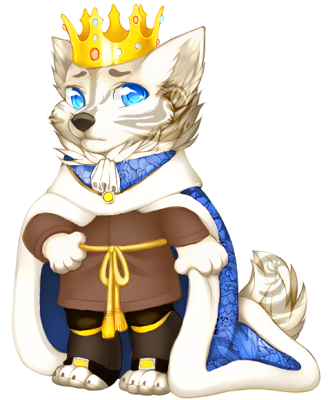 Welfin was a noble, albeit not the most respected one, and was banished from the kingdom he once called home. He had spoken once too many times out of turn, and had criticized the king too often. At times, he thought that even he could be more competent than all of the aristocracy combined. Especially more than the king. Everyone believed that the king was perfect, they'd cheer and praise him for his existence. Welfin was sick of it, and accepted his punishment. No one would see or hear of him for a very long time. Sometimes, although he would never admit it, when he was under the stars, sleeping in the overgrown fields, he longed for his nobility. And his old life.

Years later, Welfin came back to the kingdom, only to find empty husks those he once knew. Buildings collapsed, carts with bits and pieces of whatever was left, and eerie silence filled the place. He checked around some more, noticing that it also had been pilfered by thieves, bandits or just anyone who had no respect for the dead. He had no idea that such a tragedy had taken over his first home. His heart was full of grief as he walked past the almost unrecognisable remains, and down the streets to the center of the kingdom.

When Welfin arrived at the castle, there was little that was left. Except for one thing. It's bright glint caught his attention, the sun shining through the window guiding his way. He held it in his paws, examining its perfect condition. Putting it gently on his head, he noticed that it was a perfect fit as well. With a mournful look, his gaze swept over the area around him, his life was as barren as the kingdom. Maybe... just maybe he could start anew.