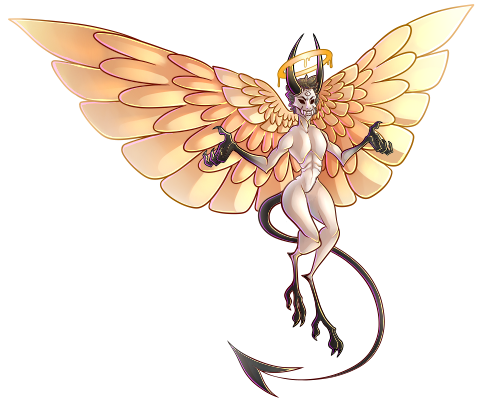 "I AM your God. And you will treat me as such."

Don't listen to a word He says. Aziel is no god. He's a demon playing pretend.

Aziel isn't even his name. It's Abbadon. But you didn't hear that from me. People say his wings are naturally black, and that he dyes them gold in an attempt to have a divine appearance. The wings on his neck aren't even his. He ripped them on an actual angel and sewed them on. He's looking for another pair, too. So if you have wings that match his aesthetic its best to stay away.

He has an ego that's as big as he is. He's the most selfish asshole you'll meet. Aziel walks around expecting everyone to drop what they're doing to worship him. In his mind, everyone is below him.

Even though he does nothing but use people for his own satisfaction, and even though he's nothing but a merciless demon, he still has people crazy enough to actually worship him. And he absolutely loves it.