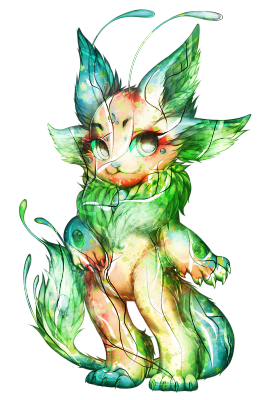 A statue, standing deep in the woods
Finely crafted with shining citrine
A magical glow of blue, emanating from within
With a thin sheet of moss keeping it warm.

The statue, by no big surprise
represents a diety lost to time
A regal being that watched over its subjects with care
But who's statue was not free from a thief's poaching.

A statue, made so long ago
Crafted with love by those who believed
With details so fine, and a gem so precious
Only a shard would make the thief rich.

The statue, standing ever strong
Could not run from the hammer of fate held in the thief's paws
And as metal struck crystal, a clang rang out
Followed soon by a sickening cracking sound.

And to the thief's horror, something they could hardly believe
From the cracks the statue began to bleed.
It's eyes, once bright, began to dull
And with it the thought of gem shards for all.

The thief, fearing exposer, turned and fled
As the statue woke from its long rest
And stretched its arms with beauty and grace
Staring out with a look ever so placid.

A statue, so regal, now finally awake
Was somehow not mad at the cracks across its face
For Asha was a kind and merciful being
And now that she was awake, a great help she would be.