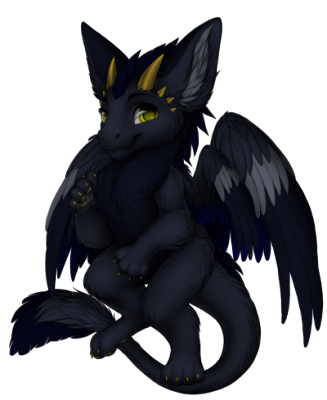 “You can never come back, you know.”

Brenna couldn’t help but cringe. He let out a sigh, turning to the dutchie that had spoken. Asterope. A good friend of Brenna, the dark-colored dragon should have known that she would try to stop him.

“I have to. My calling is the battlefield— you’ve known this for a while. If I can’t fight to defend my home, then what am I? A disgrace, that’s what. Even if it gets me cast out, then I’ll have considered my mission a success.”

Asterope’s look was crestfallen and hopeless. Brenna hated that look on her.

Asterope looked down at the ground. When she looked back up, Brenna noticed that she was crying.

Brenna awoke with a start. It was the same dream, night after night, but it never seemed to stop giving him shivers. One could argue that it was really the biting cold of the mountains that caused Brenna’s body to quake and tremble, but the Dutch Angel Dragon had never been bothered by the cold. Letting out a sigh, he sat up in his makeshift bed. Debug squeaked indignantly, not enjoying the chilly wind and snow after spending a night curled in to Brenna’s warm coat. The dragon couldn’t help but chuckle. “Come on big guy,” he sighed, placing the insect into his bag. “We have a lot of traveling to do today.

Brenna is a fallen angel. Once a high-ranking guard in Paradise, Brenna's love for combat and vicious streak in battle are what plunged him so close to the Abyss after Dutch Angel Dragons were permanently banned from Paradise and were cast so far away from the land they had once called home. Brenna worked long and hard to bring himself up out of the inky depths of the Abyss, and now is a traveling fighter, purging evil from the world in a hope to redeem themselves and once again be favored by the old rulers of Paradise.

Brenna is a lone wolf kind of dutchie, sticking to the shadows and helping those who are in need. They have a cold outside and are a tough shell to crack, but once you've earned their trust, they'll defend you until their end. Debug can always be seen perched on their shoulder, making little chirps with different frequencies to either let Brenna know how they are feeling about something or to simply ask for food. Brenna has a bit of “The Mandelorian” type relationship with Debug. Debug is his baby Yoda, and Brenna is a proud papa.