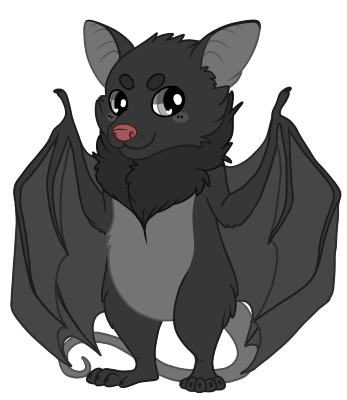 Just a shy, but somewhat sassy little bat who loves animals and spends all day wallowing in trash. She wanted to live somewhere spooky, so she bought a large tract of land with a broken-down manor house on the outskirts of Dragonsmaw; now she runs a little private villa there, where others can come to find new lives and be themselves.

Fun fact: Her tail is prehensile like an opossum's, and so she hangs upside-down from her tail instead of using her claws like a regular bat. Between her opossum-like attributes and messy household habits, Soran likes to refer to herself as the "trash bat."

Relationships: Chara (adopted child), Lilac (housemate), Zero (housemate). Acts as an employer and leader to the villa's residents, since she owns the property all their houses are built on, but her shy and reclusive nature keeps her from really becoming close to most of the others.