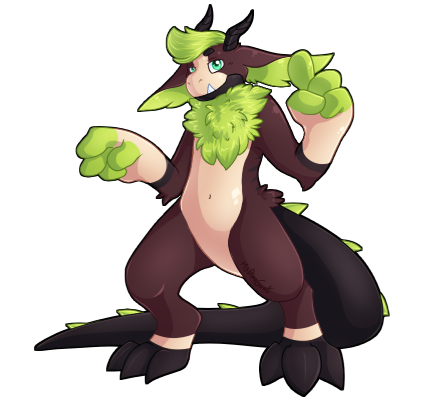 Ross is a big strange-looking creature. He might be intimidating at a first glance. But below it all is a calm and kind softie.
Before arriving in this village, where he now lives and works in, he wandered aimlessly. Constantly being shunned away by scared villagers.

It all changed one day. A day where he vitnessed bandits ambushing a small otter. The otter seemed pretty fiesty and could've maybe handled it herself. But Ross didn't like seeing someone being ganged up on and took action.
He ran towards the bandits, roaring as loud as he could. He had no idea how to fight... and really hoped it'd scare them away.
It worked. The bandits fled, sadly with the stolen goods.
The otter was jumping and shouting profanities at the bandits as they took off with her stuff.
Ross sheepishly stared down at the girl. She turned and stared up at him.

"You owe me a lot of gold...." She growled at him.
Ross stepped back with a big shocked face. "H-Huh!? I-I saved you..." He anwsered while nervously looks to the ground.
She starred at him, walking around him before patting his big paw.
"I bet you'd be a great construction worker. You can work off your debt, building houses!" Befor Ross could respond she grabbed his tail. Tugging as hard as she could. "Come on! You owe me tons of money. They took my plants! I needed those for my medecines!" She looked up at him.
Ross sighed and turned, walking beside the small otter. "Fine..." he muttered.
"oh.. by the way, I'm Leah!" The small otter blurted out. "Oh.. and thanks, but I could've taken those thugs out myself." She pulled a cheesy heroic pose.
Ross snickered looking ahead with a grin. "Sure you could."
She huffed and glared up at him. "Hey... what's your name anyway?"
He looked down at her surprised. No one had wanted to know his name before. " Ross...."
She smiled. "Nice to meetcha, Ross! I'm sure everyone will enjoy ya. You look like a strong mule!"

Ross grunted but followed her to his new home.