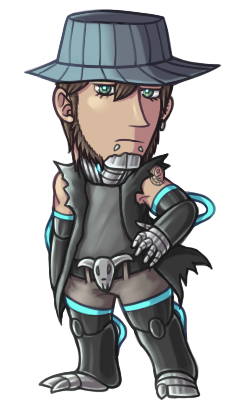 Her jailbroken form loosely mimics the Seltenian Wendigo. When she turns back, the armor separates back to its original state prior to the transformation.

Ruberel Banderus is Fordia's most notorious renegade who eventually founded a rebel army seeking to overthrow Razerel Pandaus' tyrannical global rule. She and her forces live as pirates in a stealth submarine stolen from the royal forces, which serves as their headquarters. Ironically, the petroleum ocean is the reason why Ruberel is a quad amputee, because she got an infection from oceanic nanofordians, known as "oxinecrosis", in all of them, requiring amputation. However, instead of fearing the ocean, Ruberel embraces it, because having bionics allows her to upgrade her own body to levels of power beyond what is naturally possible for her kind. In her own words, "The sea didn't rob me of my limbs, it liberated me from weakness".

That didn't come before getting arrested for assaulting Her Sovereignty herself, and becoming the first person to ever escape from Pandaus Supermax prison. While in jail, Ruberel got romantically involved with a security guard who was actually a mole from the grassroots rebellion of which she would later take the reins. From her romance with him before he was executed, she conceived her daughter, Vulcerel, who succeeded her father as the rebellion's top spy.