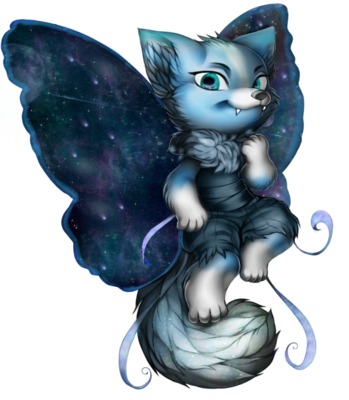 Personality
Shes in the mindset that whatever she does is for the best, and if you disagree you just don't get it. Shes power-hungry and ruthless when it comes to achieving her end goals, however shes not above a one on one conversation and can show some mercy to her friends if they get in her way. There have been times where she didn't want to give up a disguise because she enjoyed the company of those around, despite them not knowing she had taken their friends place.

Backstory
Faire Semblant was born a simple solar fairy, a species of fae dedicated to the sun and all the life that it brings. She was born to the leader of the colony and as a result was brought up with the teachings of how to be queen. These studies never satisfied Faire, who always felt there was something that neither she nor the other solar fairys understood. She often found herself sneaking out into the woods to explore and perhaps even find what she felt like was missing from her life....

It was on one of these adventures that she encountered Felix who offered her exactly what she needed...At the cost of something she could never get back.

Faire found herself losing her bright yellow colours and shiny light up wings, instead gaining a softer blue and glowing night sky patterns to match the heavens above. Eagerly she returned home to show her mother...only to be met with repulsion and grief.

Her mother didn't understand...Faire had evolved above Solar Fairys hadn't she? Why only worship the sun when the moon was just as important to life with its soft glow and control of the waves? Her mother was set in the old ways...and for the good of everyone,...she needed to be culled.

Her actions didn't go over well with the others, Faire had cemented her image as a monster and was cursed and exiled....

If she loved the night so much then let the suns rays harm her.
If she loved to do harm onto others then let it be her sole source of nutrients.

She doesn't mind, she sees it only as an upgrade. She travels from village to village, killing and taking the role of a random villager and using that guise to feed on everyone around, discarding the disguise once cornered and making a quick get away.

Another thing she does is killing and taking on the role of a villager to use their trusted image to lead innocents away. When its just those two...she bites the neck..waits...gives them some of her blood, and passes on the 'gift' be it on a willing victim or not. They get the more simple vampric powers and weaknesses. They are a normal vampire, not a Lunar Moth...As far as shes concerned the only way to make more of her kind is to turn a solar fairy.