Starting Out: Furvilla Careers
By: dedenne 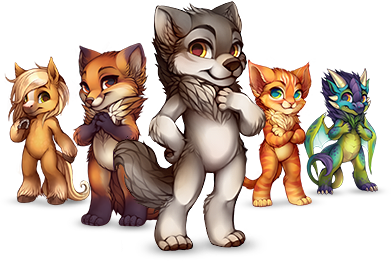 This tutorial will help you understand which careers are best suited to a new player.

A player’s first few days in Furvilla can be difficult as they learn how careers interact and how the economy operates. There is no “right” way to play Furvilla; however, this guide will hopefully smooth out any rocky starts a player may experience.

Your First Career
When a player creates their first villager, they will be shown that lists a brief description of all available classes, and the difficulty level of said class. These levels are newbie, basic, intermediate, and artisan. Let's take a look at the differences between career types.

Newbie: Relies on no other class.

Basic: Relies on no other classes at first, but may require resources from intermediate or artisan careers in the future.

Intermediate: Relies on basic or newbie level careers for resources.

Artisan: Relies on resources from intermediate and below classes.

The majority of careers depend on each other for resources, so it is important as a beginner to choose a career that does not rely on any other class since they will only have one villager at first.

There are three classes that do not need other career resources to start out: the explorer (a newbie class) and the animal husbandry and warrior (basic classes). However, animal husbandry is very slow to start, and though it doesn’t rely on other careers, no other careers rely on it either. Similarly, a warrior villager will have a slow start, and players will need to spend FurCoins on weapons purchased from the Town Hall. Because of this, it is highly recommended that a player’s first villager choose the explorer class.

The Explorer
Explorers are a unique class in that every single class in Furvilla relies on it for materials in one way or another. Seeds are gathered by explorers to be used by herbalists, who grow plants for alchemists and doctors. Slabs from explorers are used by construction workers to construct buildings for animal husbandry, herbalists, and new villagers. Steel and other materials from explorers are used by blacksmiths to craft weapons for warriors. Warriors can then give a blacksmith rarer materials to make better weapons. Lastly, an explorer’s materials can be used by crafters and tailors to create costumes with some additional drops gathered by warriors.

A player’s second class should be one that relies only on the explorer, but can help other classes in the future. It is recommended that a beginner player chooses either a herbalist or a second explorer as their next villager. A second explorer will gather materials faster and give new villagers more resources to use, while an herbalist will open up multiple artisan level careers to the player.

The Herbalist
Once an explorer or two has gathered enough seeds, an herbalist can plant and harvest them. These plants can be sold for a quick profit, or held onto for artisan level careers to use. The two careers that rely on an herbalist are the alchemist and doctor.

Both careers use the same resources, but the difference is in the number; an alchemist may require up to 500 of one plant for use in some potions. On the other hand, a doctor will only require 25 of one plant maximum. A doctor's potions are also used to cure all sicknesses a villager may have, while an alchemist creates cosmetic potions or potions that influence a single career.

At this point, with both an herbalist and an explorer, a player will also have access to resources a construction worker needs. The order in which the next career is chosen is not terribly important. It is up to the individual player to determine which career’s resources will be more useful to them.

Other Careers
There are several careers not yet covered in this tutorial. This is because they will not benefit a beginner player due to their slow starts, expensive costs, or extensive resource requirements. However, once a player has gotten some experience with Furvilla gameplay, other careers will be much easier to handle. Players should be able to experiment with what careers work best for them, and forge their own path.

If a career isn't working out, don't worry! Villagers can change their career every other hour, so a player can choose a career and change it without consequence.

For a more detailed explanation of Furvilla careers, visit the Newbie Articles and select the article for your chosen career.