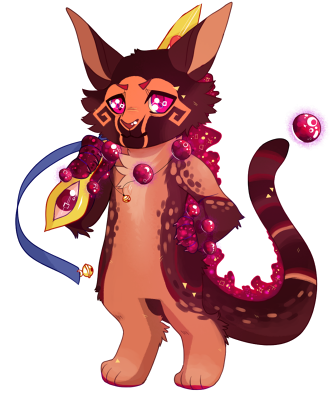 Pyxus came from a family of warriors. His father was a strong swordsman while his mother is a powerful mage. Pyxus got the best of both worlds being skilled in fighting with a sword and magic under his parent's training. After his training, he was hired as a guard in a small village near Spiral Mountains. There, he became partners with Xeth, a Mineral Demon and also a guard.

They did their job well, until outlaws ravaged the village and destroyed everything. Pyxus and Xeth ran away, but Xeth was getting weak for being too far from Spiral Mountains. They decided to pact with each other, becoming partners for life.

The orbs circling around him are his magic attacks. He can manipulate them around and use them for fighting. Partners with Xeth. Very charismatic and confident, especially in his abilities as a warrior. Thinks he's the leader all the time, even though he's not. A bit stubborn.