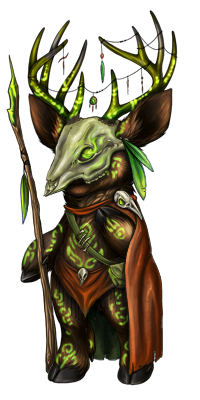 A green glow shines from a particularly lush part of the forest. Investigate it!

You leave the smilodon behind and start heading towards the glow. It doesn’t take long for you to reach another clearing, smaller than the one the village occupies. The glow emanates from a shimmering forcefield blocking most of the clearing off from the rest of the forest. Outside of the barrier, the ground is a mix of moss and ivy. Behind it, the forest floor is almost farm-like. Rows and rows of carefully cultivated plants can be seen. Most are native to Foxbury, but there’s more than a few from other places as well. A small pond hosts sprouts native to the Oceandome while deep shadows provide ample shade for those from Dragon’s Maw Manor. Ice chunks lay among the roots of plants from Tiger Eye Peak, and small floating clouds hold seeds from Quetzal Palace.

It takes you a moment to finally notice the figure moving between rows. He moves carefully so nothing is left disturbed, but his gentle movements mean that it’s hard to keep an eye on him among the swaying plantlife. It takes you another moment to notice his branching antlers and the long staff he carries. As you keep looking at him, you notice more. He wears a dark brownish red cloak pinned in place with a small bird skull. Matching it is the deer skull he wears on his head. It seems a little odd considering that he’s also a deer, but you keep yourself from judging. For now, a least.

He pauses a moment, seemingly disturbed by your examination, and turns to face you. Now you see the green runes covering his body and the matching glowing eyes. He studies you for a second before starting towards you, moving as carefully as before. Finally he stands in front of you, the barrier the only thing separating you two.

“Who are you?” he asks. His voice is calm and almost languid, like how he moves.

You answer him. He hums, seems to think for a moment, and then steps through the barrier. You step back to give him room.

“My name is Dekel. Are you here for something?”

You could say you just wanted to see what the glow was about, but is that enough of an answer to stay and ask him questions? Alternatively, you could also say goodbye and head back to the village.
Permanent herbalist
Paintie was made by VoidDancer!