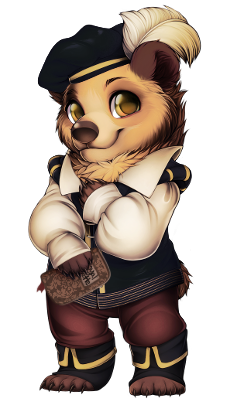 "Instead of trying to make your life perfect, give yourself the freedom to make it an adventure, and go ever upward."
-Drew Houston

Noble by birth, Teodor had an expansive list of opportunities from the moment he came into existence. The only thing that outweighed his opportunities, though, were his responsibilities. Being the son of the duke meant he needed to keep up appearances, and to learn what it took to follow in his father's footsteps. Admittedly, it was more pressure than Teo would have chosen for his childhood, but it isn't as though he would change that sort of thing either. Those pressures made him into the man he was supposed to be.

While at first glance, one might assume that Teodor's tale is one of a son who runs from his noble duties in order to pursue his own ventures, but this is not at all the case. While Teo always had his own ambitions, to be a scholar and to have a fine collection of stories to tell, he saw no reason why he had to choose one over the other. Why not be a well-learned duke?

And, with a bit of convincing, Teodor was given his father's blessing to pursue academia as yet another way to prepare him for his role in the upper echelons of nobility. Thus, Teo went on a long journey spanning several years. He had many adventures along the way and encountered a number of insightful scholars who helped shape his academic mind. Not to mention....he came back to the kingdom with a fair number of riveting stories to recount as well.

In the end, Teodor became a duke as his parents wished for him to. However, he never could be the perfectly well-mannered, pompous man that everyone expected. Whenever someone came asking for help, it certainly didn't matter if the royal family or the noble counsel couldn't help....it was sure that Teodor would lend his own paw. It ended him up on a number of life-threatening adventures, but the kingdom was certainly far better for it.