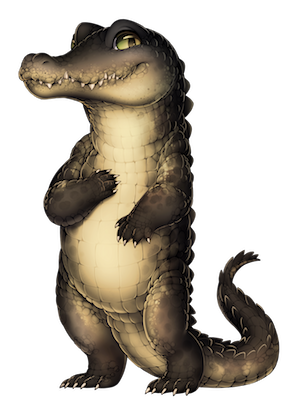 100% obtained his medical license legally. Guaranteed or your money back!

A slightly paranoid but kind (enough) fellow, this croc doc barely remembers his name, only recalling it had something to do with a K...he...Thinks. He loses train of thought easily, and can forget things he's just said or did, resulting in him maybe not being the best choice of a doctor.

Despite his... er... questionableness, he truely does want to help others. At least, those he likes.

His favorite person is Percy, whom he has been dating for quite a while now. K is the only person who can calm Percy down, no matter how wound up he is, and Percy is always willing to help K with his paranoia, ready to reassure him as many times as needed that everything is A-OK.

(May or may not be doing experiments on himself.)