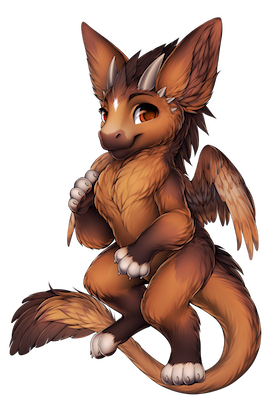 Beau/Belle no longer has a house! They will be unable to work. Please replace the house or move Beau/Belle into a FC slot.

Biologically speaking, he is a male, but sometimes he feels like a girl and it's just... Confusing! For pronouns, there's a certain time when to address him as a guy and when to address him as a girl. You literally have to ask and he'll tell you what he is for that time being. Not very many people hang out with him because of his gender switches. One second, he's a sports-loving guy, then the next second he's a makeup-loving girl.

He is pansexual and literally hits on EVERYONE! Even the people who are already taken! Beau secretly has a shipping chart in his tailor shop with names shipped with his and reasons why they'd make a cute couple. Heck, he even cross-ships other people (again, even the furries who are already taken). Truth be told, he doesn't WANT to be stuck with one person for the rest of his life (so that he could keep crushing on everyone without feeling guilty).

If you're already feeling curious to why he has two names, then this paragraph will teach you what it means in a nutshell. Beau is his biological male name, while Belle is what he named his girly counterpart. Again, if you're talking to this snake, you'd have to ask his current gender and address him by the name associated with the gender. It gets annoying, that's for sure.

As for personality, he's a quiet, but not shy, thinker (as mentioned previously). Most of his speech consists of hmms and ahhs (also random soliloquy outbursts because he's dramatic like that) because a majority of the time, he's, well... Thinking! Thinking about his clothing and how to make them amazing! And well, he's also thinking about ships. But MOSTLY clothing, let's just say.

For clothing, He wears a red-knitted turtleneck sweater and legwarmers because he likes the cozy look.

Oh, and he also used to be a snake but then some shady potion dealer showed up at his door and promised him a potion, rendering eternal youth. Being the completely oblivious person he is, he bought the potion promptly and drank it without a second thought, only to be turned into... A Dutch Angel Dragon! Ah well... At least he can fly and look charming at the same time lmao.

(Some Beau/Belle quotes)
"Address me by the correct pronoun and name please!"
"Hmmmmm... Ahhhhhhh... I see."
"Oh, this person and this person would go SO WELL with each other. Too bad the latter is already taken and the former is gay. RATS!"
"This dress has to be PERFECT with no rips or stray seams! But oh dear me, how am I going to execute this?? Ahhhhh!!"
"Oh my stars! I suppose this is all or nothing for this very last seam. Here I sew!"