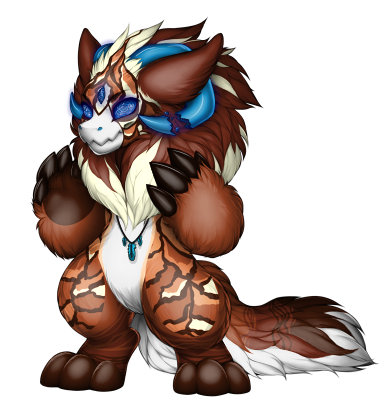 Inanis is the result of Pontus' magical dabblings with his spiders. A near-death wickerbeast came to Pontus for assistance, but all he could provide was his spiders and their web. The web holds Inanis together, while the spiders act to control them. The venom perpetually injected into Inanis' brain seems to keep them very much alive, though they've certainly been reduced to little more than a beast with very few cognitions of it's own.

Influenced by the spiders' love for Pontus, Inanis is dedicated to protecting the eccentric gentleman by any means necessary. The results are often thoroughly violent and the tailor can't help but wonder if the wickerbeast who Inanis used to be was also this terribly dangerous. Concluding that the beast was there to stay, Pontus decided to call it "Inanis", Latin for "empty" or "vacuous". It seemed utterly appropriate for such a creature. Given the beast's stark physical changes, it was hard to simply call it a wickerbeast any longer. Pontus simply dubbed Inanis the first ever spiderbeast, finding himself wondering what other peculiarities he could produce through his spiders.

One amusing oddity Pontus quickly discovered about his new guardian was how innately curious it seemed to be. Usually, Inanis would be content simply to stand in place, not really looking at anything in particular. However, when Pontus would do tailoring, or work on splicing unique spider traits, the spiderbeast would watch closely with a strange, inquisitive light in its eyes. Pontus swore he heard it speak a word of inquiry one day.

This characteristic curiosity led Pontus to believe that Inanis could have been some sort of intellectual when it was still fully self-aware. However, unless someone could identify it, the gentleman tailor would almost never know for sure.