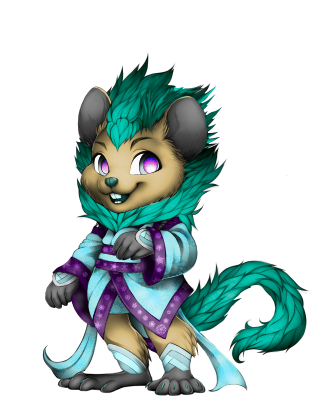 Quent is infected with Zombipathy. Eating brains relieves symptoms for a time, but comes with memories of the brain's former life. Your doctor recommends adding hot sauce for extra flavor, but a Golden Apple a day will send the Zombipathy away.

Quent is an odd mouse. Many say that they don't like him, due to his annoying and grating personality. Many others say his personality is timid and sweet. Which group is correct? Both actually. Quent acts differently depending on who he is interacting with. Either you'll get the timid kindly personality that just wants to be helpful, or you'll get the troll that pokes at and prods at something until he instigates a fight. Which he promptly runs away from. Quent is not one for conflict and is often called a coward for it.
Much of the time Quent can be found in his garden, planting, tending and harvesting plants. He doesn't tire of the tedious activity, and has harvested in excess over fourty thousand plants so far. It doesn't seem like he will stop anytime soon. The only time he takes a break from his gardening is to get medicine, and check out the newest villagers. At some point he eats, but no one really knows when. Quent normally falls asleep while still working in the garden.